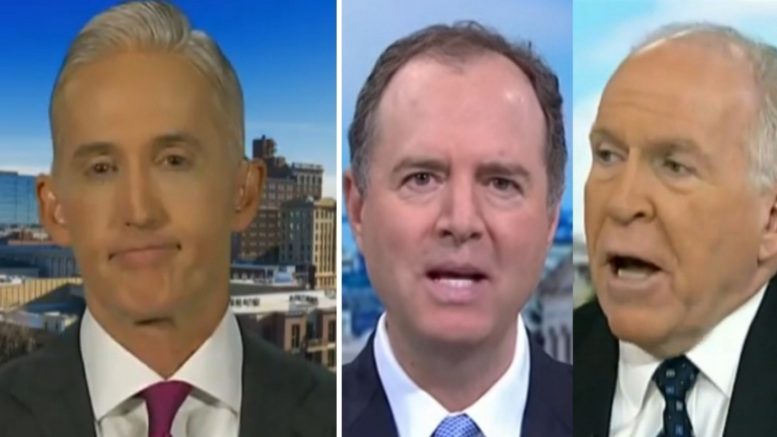 On Thursday, Trey Gowdy joined Bret Baier of Fox News to discuss the latest drama in the political arena.

The most heated part of the interview came when Gowdy discussed President Trump’s decision to declassify FISA documents and if there is evidence of Russian collusion. Trey ultimately called out John Brennan and Adam Schiff while getting his points across on the 2 subject matters. Video Below

In a recent interview, Brennan can be heard calling on the FBI and DOJ to “push, push, push” back against the President’s order and that it’s their “obligation.”

Gowdy responded to Brennan’s remarks by saying he “could give a damn less what John Brennan thinks the President or the intelligence agencies should do.” He cited Brennan’s consistent hatred for Trump and blamed Brennan for creating the divide that exists over the FISA issue.

Gowdy also said he has read the documents Trump wants released and that he sees no concern to national security. If anything, Gowdy thinks Brennan doesn’t want the documents coming out because there is information that would “embarrass” the former CIA Director.

Gowdy was then asked if there is any evidence of Russian collusion based on all of the evidence presented. Video Below

Trey said after all of the testimonies and documents brought forth so far, there is zero evidence of collusion. However, he mention how in March of 2017, Adam Schiff claimed he had “evidence that was more than circumstantial but not direct.”

In a sarcastic tone, Gowdy called Schiff the “wanna-be senator in California” and said if you ignore his bogus claim, there is no concrete evidence that has been brought forth suggesting collusion. This is exactly why the investigation has now shifted towards obstruction according to Gowdy.

Related Article: Rep. Jordan Just Revealed ‘Key Details’ That Will Be Released Within The Secret Documents

Do you think Trey Gowdy would make a great Attorney General and would help Drain The Swamp in Washington? Comment your thoughts below!