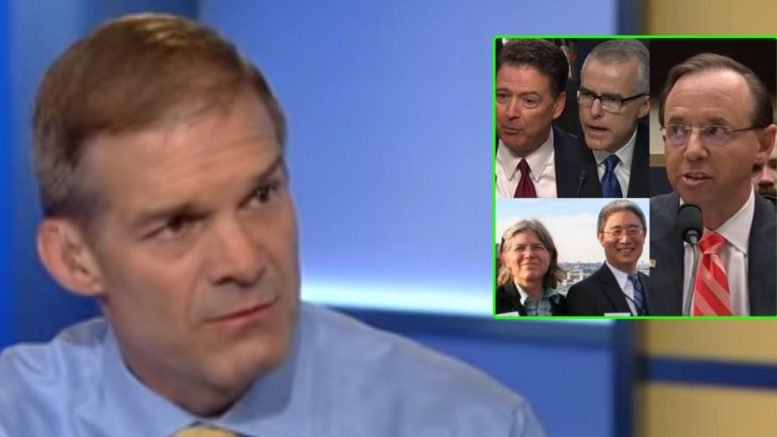 Names being named on which Obama administration officials are being called to testify to Congress. Photo credit to Swampdrain compilation with screen grabs.

Congressman Jim Jordan (R-OH) joined Laura on FOX News’ The Ingraham Angle and they named names on WHO will be testifying in front of Congress.

In a BLOCKBUSTER announcement – some BIG NAMES are invited to speak to Congress on Capitol Hill. (VIDEO BELOW.)

Jim Jordan wants Rod Rosenstein in front of Congress – but that’s just the TIP of the ICEBERG!

“Here is what I know. You have the guy who in effect is running the Department of Justice. Who in front of subordinates is talking about recording the Commander in Chief,” Jordan said.

Jordan asked, “Do we really want that to happen in the United States of America?”

He continued, “The same guy who has made it difficult for us to get the documents we need,” Jordan called for Rosenstein to testify “and answer our questions. The American people need to know what took place,” Jordan said. (VIDEO BELOW.)

In a FIERY report – Ingraham told America WHO is asked to testify to Congress from the Obama administration!

MORE Obama administration people will be testifying in October with hard dates in hand! See who!

Jim shared with everyone the upcoming Congressional schedule. He said, “Here’s other news too. We know next week Jim Baker, former Chief counsel of the FBI…is going to be in for a deposition.”

“Then October 19th – we have Nellie Ohr…wife of top official Bruce Ohr,” Jordan divulged to Laura who asked if this would be Nellie’s first time to testify. And it will be her first time, Jim confirmed.

WATCH as the Obama gang list grows of WHO is wanted in front of Congress.

Do you think the Obama gang will go willingly to Capitol Hill to testify in front of Congress? Or do you think they will have to be subpoenaed?