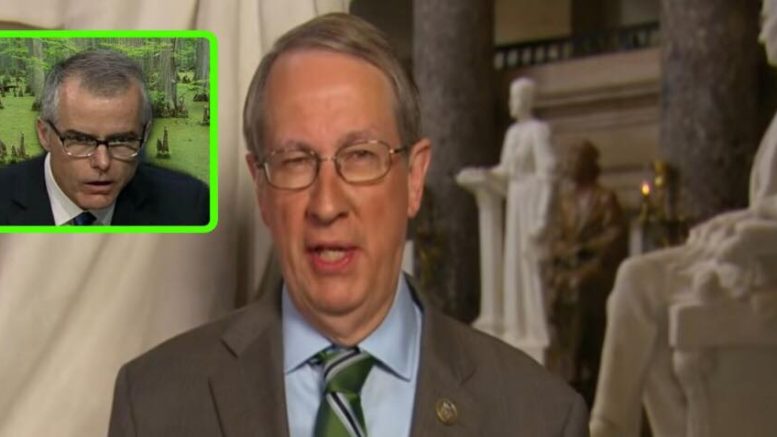 In the wake of the explosive Supreme Court testimonies, Bob Goodlatte navigated under the radar in a stunning move!

Bob Goodlatte dropped the S-bomb on McCabe. Bob made a direct HIT!

Goodlatte sent the letter to Attorney General Jeff Sessions. Click here to read the letter from Bob who is the Chairman of the Judiciary and Oversight and Government Reform Committees.

Additionally, the actual subpoena can be seen here.

The subpoena calls for the now famous “McCabe Memos.” They exposed Rod Rosenstein’s desire to wire tap the President of the United States. Rosenstein was caught discussing the possiblity of invoking the 25th Amendment. The memo’s include communications between McCabe and senior government officials from the Obama-era. (Continued Below.)

Additionally, the subpoena called for “all documents supporting the facts claimed by the FBI in its application for, and subsequent renewals of, a FISA order authorizing surveillance on Carter Page.”

“As as well as – all documents and communications originally shared with the Gang of Eight related to the investigation into Russian interference in the 2016 U.S. presidential election,” as stated by the House Judiciary Committee. (More Below.)

See the tweet below with the BLOCKBUSTER announcement that went unnoticed!

House Judiciary Committee Chairman @RepGoodlatte today subpoenaed the Department of Justice for several documents that have been withheld from the Committee, including the McCabe memos. See the full details here: https://bit.ly/2Dze6Ft

House Judiciary Committee Chairman @RepGoodlatte today subpoenaed the Department of Justice for several documents that have been withheld from the Committee, including the McCabe memos. See the full details here: https://t.co/atFsLscNtZ pic.twitter.com/EFOr3FNEom