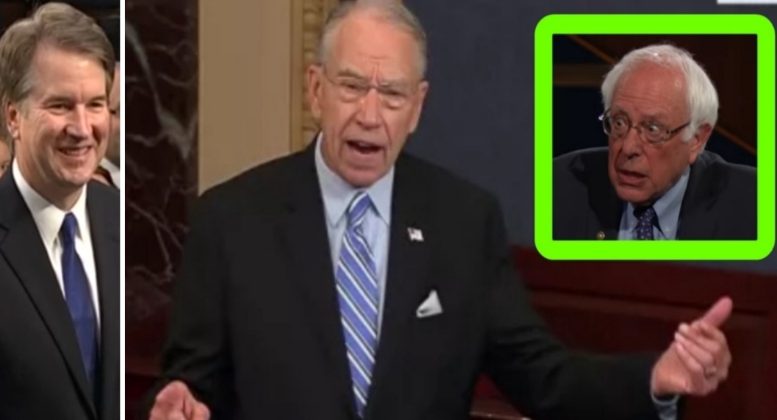 Failed Presidential nominee – Senator Bernie Sanders (I-VT) – piled on to the top of the heap of Democrats who are assassinating Kavanaugh’s character. Sanders did not hesitate to smear Judge Brett Kavanaugh on Saturday.

Bernie sent a letter to Judiciary Committee Chairman, Senator Chuck Grassley to further impugn the character of Kavanaugh by calling him a liar and asking for MORE delay time. And Grassley wrote back and put Sanders squarely in his place! (BOTH LETTERS BELOW.)

Bernie set out to TOTALLY crucify the Justice nominee.

First, it is important to note that Sanders attempted to distance himself away from the Democratic party.

On his public twitter account he is now self-described as “the longest-serving independent in congressional history.” So – straight up socialists are now “independents.” Who is the liar?

Sanders sent an OUTRAGEOUS tweet and letter. It was meant to destroy the good character of Judge Kavanaugh. The good Judge had undergone SIX FBI investigations with no mention of any type of sexual abuse allegations. Yet, Bernie Sanders stooped as low as he could go and joined the bottom of the barrel in political hackery.

Specifically, Sanders’ tweet stated, “Lying to Congress is a federal crime. The FBI must examine the veracity of Kavanaugh’s statements under oath in addition to the sexual assault allegations against him. Kavanaugh’s truthfulness with the Senate goes to the very heart of whether he should be confirmed to the court.” But Grassley did not let him get away with it! (MORE BELOW.)

The letter stated in part, “In order for the FBI investigation regarding Judge Brett Kavanaugh’s nomination to be complete, it is imperative the bureau must not only look into the accusations made by Dr. [Christine Blasey] Ford, Deborah Ramirez and Julie Swetnick, it should also examine the veracity of his testimony before the Judiciary Committee,” Sanders wrote in the letter”, per The Hill.

Lying to Congress is a federal crime.

The FBI must examine the veracity of Kavanaugh’s statements under oath in addition to the sexual assault allegations against him. Kavanaugh's truthfulness with the Senate goes to the very heart of whether he should be confirmed to the court. pic.twitter.com/TsNOTm4fxK

Senator Chuck Grassley was having NO PART of the Democrats’ attempts at assassinating Kavanaugh’s  character.

As Red State reported and transcribed:

Thank you for your letter today. As you know, on July 10, 2018, you stated, “[W]e must mobilize the American people to defeat” Judge Kavanaugh. This happened less than 24 hours after Judge Kavanaugh’s nomination was announced. As you also know, all Senators have had access to 307 judicial opinions Judge Kavanaugh wrote over his 12 years on the bench, over 500,000 pages of documents, over 40 hours of live testimony, and move answers to written questions than every prior Supreme Court nominee combined. Nevertheless, you made your decision on this nomination in less than 24 hours.

Translation – “Pffft, you obviously never read the info we gave you – why do you want more?” Grassley continued:

Your public statements clearly reveal how unimportant it is to you to review any facts related to this  nomination. So you can imagine my surprise at receiving your letter regarding the supplemental FBI background investigation. This supplemental FBI background investigation was requested by undecided members of both parties. Am I to take from your letter that you are now undecided and seriously willing to engage with the Senate’s advice-and-consent constitutional duties related to the nomination of Judge Kavanaugh to serve as an Associate Justice on the Supreme Court of the United States? If so, we should have a conversation about what information you need to assist you in making your decision, and I look forward to that conversation.

I can’t stop clapping. This take-down is beautiful. But it’s not complete without a totally dismissive parting line:

I appreciate your raising concerns, which others have already raised, at this 11th hour.” – Red State.

In closing, see Grassley’s letter below.