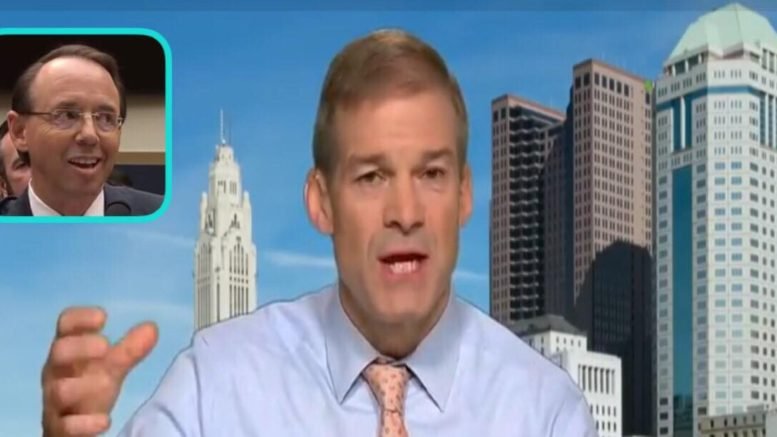 Jordan is fed up and ready to uncover the truth for the American people. (Video Below)

During the interview, Maria began by pointing out that Jim Jordan has a big week ahead as Glen Simpson on Tuesday, James Baker on Thursday, and Friday Nellie Ohr will all testify.

Rosenstein had been tentatively scheduled to appear Thursday before the House Judiciary Committee, but that meeting has been delayed.

“He’s got to come in and answer questions. If it takes a subpoena, then that’s exactly what needs to be done.” Jordan said.

Rep. Jim Jordan said that Deputy Attorney General Rod Rosenstein should be subpoenaed if he refuses to testify in front of the House Judiciary Committee for his role in the FBI’s Russia probe and for allegations that he wanted to invoke the 25th Amendment against President Trump.

“When Jim Baker was in his deposition two weeks ago and was asked about this, he was serious as could be in describing what he understood took place in that meeting that took place between Andrew McCabe and Rod Rosenstein. Mr Rosenstein talked about actually recording the President of the Untied States.” Jordan said.

Jordan plans to ask Baker more in dept questions about Rosenstein and the specific meeting, the conversations, and who he talked to during the meeting.

He explained there were several people who were communicating information to the FBI about the Russian investigation. (Video Below)

“I think that it was this idea that if the more people have talking about the ‘big lie,’ which was the dossier, the more apt people are to believe it. That’s exactly the technique and method they were trying to use to get people to buy into this dossier that was actually used to go spy on the other party’s campaign.” Jordan said.

Rod Rosenstein gave the green light and signed the final FISA warrant to spy on Carter Page which makes him a witness.

Jordan believes there are conflicts with Rosenstein and McCabe. Neither of them should have been overseeing the Mueller investigation. McCabe had the conflict when his wife was running for office, and Rosenstein wrote the memo to fire James Comey. (Video Below)

He said that one of the things Mueller is looking into is potential obstruction of justice in the firing of James Comey. It’s a set up.

Jordan also pointed out that several documents, classified information, he and his team have requested are being hidden and he can’t get to the bottom of it for the American people.

The Ohio Representative said that he believes President Trump will declassify the documents soon that will wipe out the narrative that Trump colluded with Russia.

Maria pointed out that if the democrats flip the house we may never hear another word about these investigations, and America will never know the truth.

Are you ready for President Trump to declassify? Let us know what you think in the comments below.