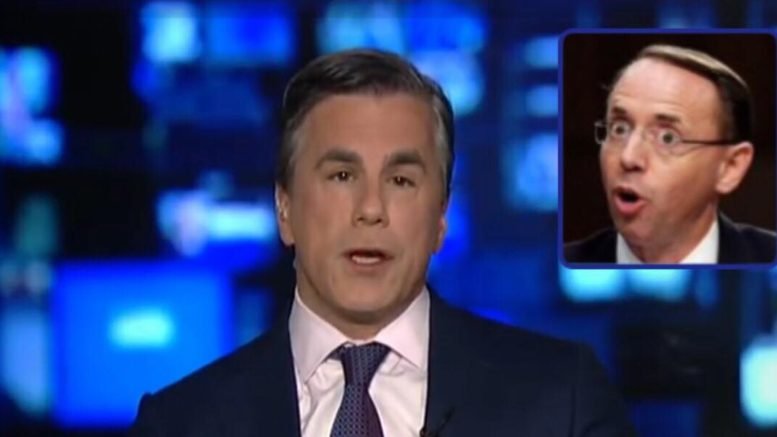 Deputy Attorney General Rod Rosenstein “was” scheduled for a closed-door interview with House lawmakers on Wednesday.

However, Tuesday night it was announced that the House Judiciary and Oversight Committees will postpone tomorrow’s hearing with Rosenstein. (Video Below)

In an interview on Fox News Tuesday, Judicial Watch President Tom Fitton announced he is not a fan of the interview format.

House Judiciary Committee Chairman Bob Goodlatte (R-VA) stated he wants to know about the report that Rosenstein talked about wearing a wire during a meeting with President Trump, and  invoking the 25th Amendment to replace him.

Goodlatte said the closed-door interview with Rosenstein will be held in a secure room, and that a transcript will be released after the intelligence community reviews it for classified information. (Video Below)

Bob Goodlattle explained that the secure room allows “the opportunity to ask any question that needs to be asked, and not have concern about it not being in a classified setting and not be concerned about leaks, which have been a serious problem with our investigation.”

However, Tom Fitton, doesn’t like the idea that only two Republican chairmen and two Democrats on the House Judiciary and Oversight committees are set to interview Rosenstein.

“This is going to be secret testimony. And if you’re trying to prevent facts from getting out to the public, this is the way to do it.” Fitton said. (Video Below)

The Justice Department doesn’t want to answer questions from Congress, and lawmakers are being “way too deferential.” Fitton explained.

“I don’t trust that the information will get out to the American people in a timely way and I don’t trust that, generally speaking, members of Congress and congressional committees to be doing these types of investigations behind closed doors. I’m tired of these secret testimonies before Congress.” Fitton said.

Although Goodlatte said a transcript of the Rosenstein interview will be made available, Fitton wants to know when an unredacted, unclassified version will be made public.

“So the same Justice Department that doesn’t want to answer the questions is gonna be declassifying the material? Talk about a conflict,” Fitton said.

Fitton noted that Judicial Watch will continue doing its own “watchdog work,” because they simply don’t expect much from Congress.

“Here you have Congress basically getting down and letting Mr. Rosenstein walk all over them. And it’s just unbelievable to me.” He added.

The announcement of the interview with Rosenstein postponed per Goodlatte and Gowdy in a statement reads:

“The Committees are unable to ask all questions of Deputy Attorney General Rod Rosenstein within the time allotted for tomorrow’s transcribed interview, therefore, the interview will be postponed. Mr. Rosenstein has indicated his willingness to testify before the Judiciary and Oversight Committees in the coming weeks in either a transcribed interview or a public setting. We appreciate his willingness to appear and will announce further details once it has been rescheduled.”

Watch Fitton as he explains how Congress is allowing Rosenstein to walk all over them:

Do you agree with Tom Fitton? Let us know what you think in the comments below.