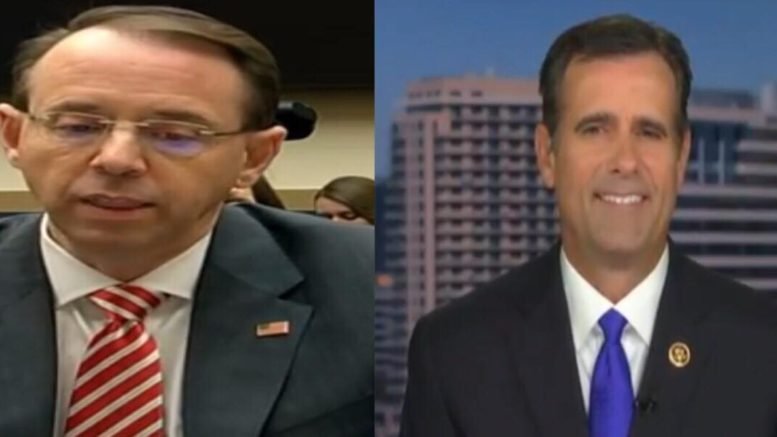 The interview was intended to shed light on the RUSSIA RUSSIA RUSSIA narrative the Democrats promoted all last year. (VIDEO BELOW.)

The Democrats and the media pushed the RUSSIA COLLUSION narrative onto the American people.

The only problem was, there was no Russian collusion. It is becoming more and more apparent that it was merely a narrative created by the corrupt Obama-era DOJ and FBI.

Ratcliffe said this about it, “The more people we talk to, the more troubling it is.” Furthermore, he said, “It’s really the same old story— there’s no collusion, there never was collusion.”

“That’s why we need to talk to folks like Rod Rosenstein to get better answers to what he knows about what the FBI and the Department of Justice were doing back then.”

Ratcliffe has Rosenstein running to study up for potentially an upcoming PUBLIC HEARING.

Rosenstein failed to show up for the last congressional testimony. He “thought it was going to be about wearing a wire to record the President pursuant to the 25th amendment,” Ratcliffe told Maria.

“Hopefully, justice delayed is not justice denied,” Ratcliffe said about Rosenstein’s prior failure to testify. He continued, “he has agreed to come back. I think he will spend a a full day with the Judiciary committee.” (VIDEO BELOW.)

Maria asked the question we ALL want to know!

Maria inquired, “Is that a public hearing when he comes back?”

Congressman Ratcliffe responded, “I think this is more likely going to be a public hearing where more members of congress will be able to ask some of the questions I just raised directly to the Deputy Attorney General.”

Get ready Rosenstein! America wants to know what REALLY happened and how this phony RUSSIA COLLUSION story was started in the first place! (VIDEO BELOW.)

Watch the video below as Ratcliffe discussed the Rosenstein hearing with Maria Bartiromo.

WATCH as Ratcliffe discussed the Papadopoulos testimony with Maria Bartiromo.