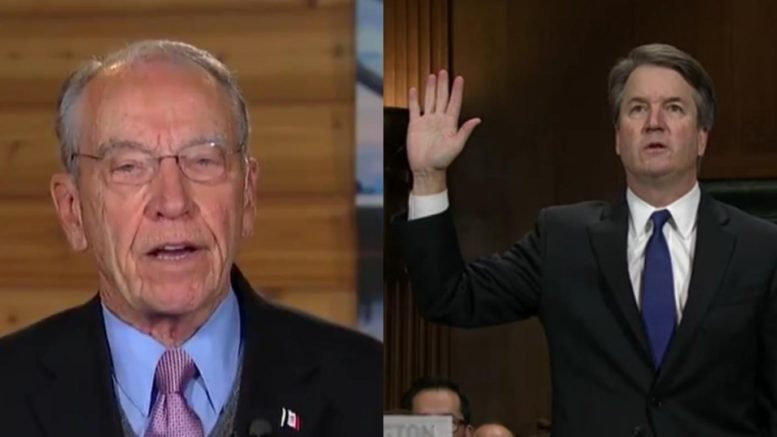 Grassley discussed the results of the over 400 page summary report on the false accusations against Justice Kavanaugh. (VIDEO BELOW.)

So what were the results of the Congressional investigation on the Kavanaugh accusers?

Well, the bottom line is they lied for political reasons or felt pressured by the Democrats and there were cases of “mistaken identities,” Fox News reported.

“The 414-Page Report Concludes No Evidence to Support Allegations Against Justice Kavanaugh,” reported the Judiciary Committee.

Not only was there no evidence, but several cases will be referred for criminal investigation. (VIDEO BELOW.)

Grassley speaks out on what happens when you LIE to Congress.

“We have to be able to make it very clear to the entire public. That lying to congress is a felony on a couple of sections of our code. And we want to make sure that the process of confirming Supreme Court Justices….that you want to know that it is truthful.”

“We want to discourage coming to Congress with information that not only hurts individuals but is out right WRONG,” Grassley stated. The days of creating a circus show during confirmation hearings has come to a screeching halt.

As a result, Grassley has “urged the FBI and DOJ” to “investigate Julie Swetnick and her lawyer, Michael Avenatti, for allegedly false statements made during the confirmation process for Justice Brett Kavanaugh,” reported USA Today. (VIDEO BELOW.)

WATCH THE VIDEO BELOW:

.@ChuckGrassley: "We have to be able to make it very clear to the entire public that lying to Congress is a felony." #TheStory https://t.co/h623GkLqQa pic.twitter.com/SaLNvd1Ntf