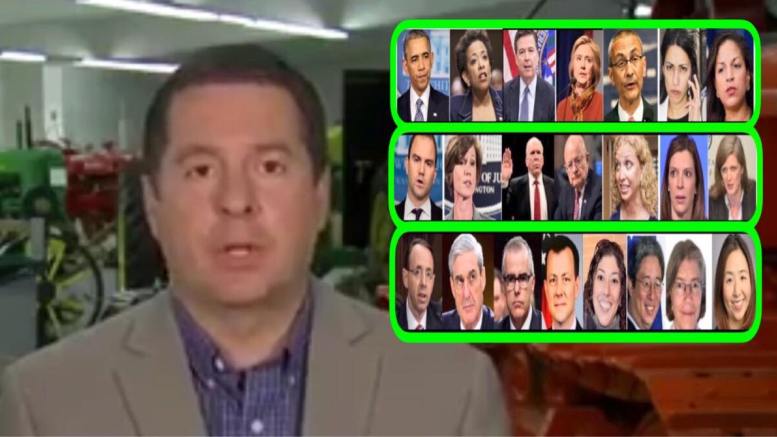 Devin Nunes joined Sean on the Hannity show Tuesday night in an explosive discussion on the Mueller probe questions that President Trump submitted.

Nunes (R-CA) who is the 115th Congress’ Chairman of the House Intelligence Committee spoke his mind on  the Russia Mueller probe. (VIDEO BELOW.)

Does it spell the end of the Mueller probe and what is next?

Representative Devin Nunes brought up an interesting angle. He discussed why the Mueller probe starts and ends with President Trump but there is no investigation into the other side of the coin.

“I think Sean, what I would like to see is with the Mueller probe is – some kind of probe into Christopher Steele and the Clinton campaign – and those Russians,” Nunes told Sean.

Specifically, he said, “That’s what’s really disappointed me about all of this.” Then Nunes mentioned General Flynn. And would also like to know “who leaked” his name.

“There was never any collusion between the Russians and the Trump Campaign,” Nunes said and continued, “Sadly, you have half of the Democrats in this country that believe that somehow the Russians changed votes in the last election.” “So maybe this is coming to an end. I still don’t believe it. I won’t believe it until I see it,” Nunes said. (VIDEO BELOW.)

Nunes exposed the Fourth Bucket and why it is important for.

The fourth bucket are the emails that hold classified information from the FBI. Nunes said if President Trump released the information then, “It gives finality to everyone who wants to know what their government did to a political campaign.”

The Obama-era DOJ and FBI made a banana republic out of us by spying on an opposing Presidential campaign. What do you think of that?

Related Article: Nunes Uncovers A ‘Fourth Bucket’ Of Classified Info & Discusses What He Thinks Is In It (VIDEO BELOW.)

WATCH Nunes discuss the probability of the end of the Mueller probe.