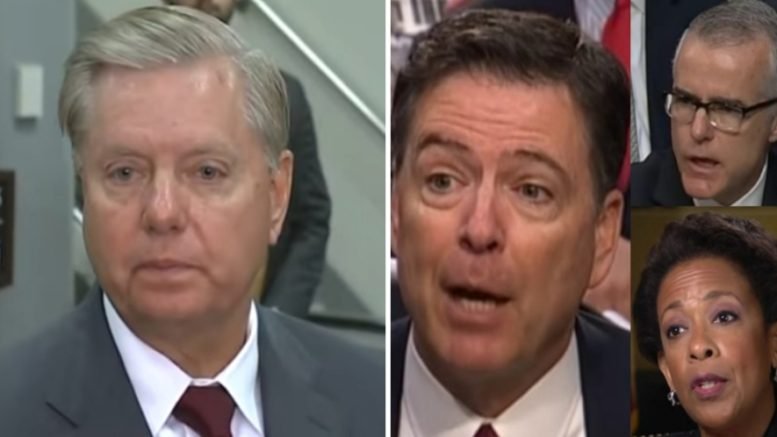 Lindsey Graham disclosed next steps to finding truth to the corrupt Obama-era dealings with the FISA court. Photo credit to Swamp Drain compilation with screen shots.

On the heels of disgraced former FBI Director, Jams Comey who refused to show up for the congressional subpoena next week in a closed-door setting, Lindsey Graham told the next steps to get to the truth of the FISA abuse scandal under Comey’s watch.

Senator Lindsey Graham, (R-SC) joined Sean Hannity Friday night on his radio program and what he disclosed will leave you feeling good about the direction of holding people accountable in our Government. (VIDEO BELOW)

Lindsey began with, “So the zeal that Mueller has to try to break people to try to find out if they know more than they are telling us was never present during the FB-DOJ debacle.”

He said, “We never had any special counsel. So if you are going to spend all of your time in the House looking at 2016 and looking at Trump…I’m in charge of the Judiciary Committee. Brian Johnson’s (R-MN) in charge of Homeland Security,” Graham said.

The Democrats in the House will create investigations for the media frenzy and will have little backbone or legal standing. Additionally, what about the House wasting the time they could spend helping the American people instead? (VIDEO BELOW.)

Graham plays 4D chess on the House and their investigations on Trump.

Lindsey told Sean, “we’ve got plenty of opportunity to look at McCabe, Comey ,Lynch…ALL of these people. About what they did with the FISA warrant and what they did about the Clinton Email investigation.’

Graham sent a message loud and clear to the House. He said, “If you want to play that game? We’ll ALL play it!”

Sean asked about Uranium One and the exoneration of Hillary. Lindsey responded strongly with the FISA abuse. He said, “so here’s what I’m going to do. The FISA Warrant process seems to have been abused.” (VIDEO BELOW)

Senator Graham gets to the criminal behavior behind the FISA scandal.

Specifically, Graham continued, “The Democratic Party along with Clinton paid a Foreign Agent, to collect information against [sic] candidate Trump.”

“[This] Foreign agent that was used to get a warrant and none of the information is reliable. How could you get multiple warrants much less one?” Graham asked rhetorically.

“If we don’t find out what happened there then we’re letting the whole system down,” he said.

“So I’m going to LOOK AT THAT,” Graham stated in no uncertain terms. BOOM! Look out House, the Republican’s are in the SENATE.

LISTEN to the LIVE broadcast of the Sean Hannity Radio Show with Lindsey Graham. Start at 7 minute mark.