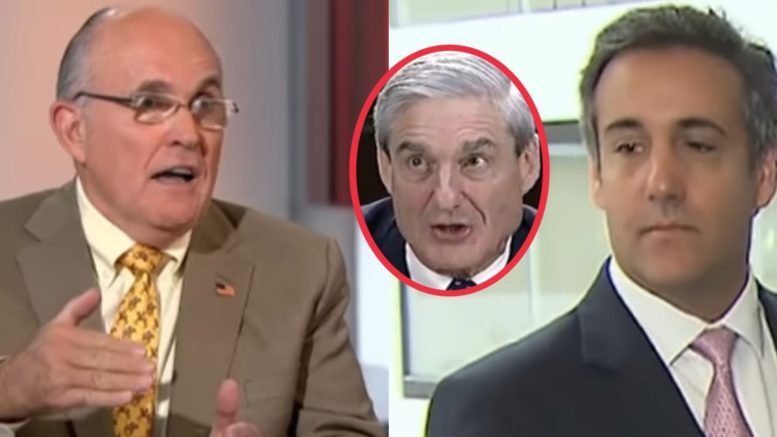 In a an outspoken moment, Rudy broadcasted over the airwaves, exactly what the Mueller Witch Hunt team is up to. (MORE BELOW.)

Mueller’s team hard lines Trump’s associates to squeeze them so Mueller can get a perjury charge.

Rudy Giuliani, “accused Mueller of crossing a line by ‘intimidating’ Trump’s allies into saying ‘what he believes [is] his version of the truth,'” as reported by The Hill.

“‘They obviously exerted a lot of pressure on him. Mr. Cohen unfortunately has a history of significant lies in the past’,” Giuliani told host John Catsimatidis, reacting to Cohen’s admission last Thursday that he lied to Congress when he previously detailed to the body the extend of the president’s business dealings in Russia,” The Hill reported.

“This isn’t a search for the truth. It’s a witch hunt. This is what is wrong with these special prosecutors an independent counsels. They think they are God,” Giuliani stated.

Rudy continued, “They seemed to want to prosecute people at any cost, including the cost of ethical behavior and the rights of people.” (MORE BELOW.)

Giuliani hit to the heart of the matter.

During the interview, in no uncertain terms, Rudy told exactly what tactic Mueller’s team is using.

They are basically, squeezing anyone close to Trump to try and break them so they might “get” the President. Yet, if they can secure a perjury rap on a Trump ally then that can be used in the media. This tactic is win-win for the Mueller Witch Hunt team.

In ending, is the Mueller probe the “insurance policy” that Strzok spoke about in his now famously biased text message?