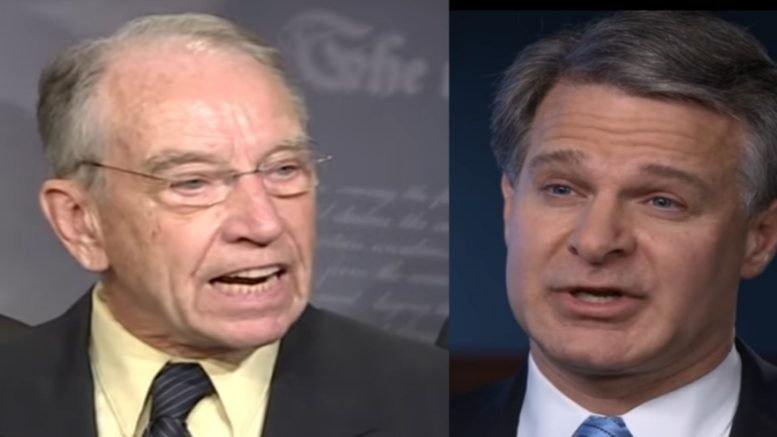 Grassley wants answers to the FBI raid on Clinton Foundation whistleblower from Wray at the FBI. Photo credit to Swamp Drain compilation with screen shots.

Why? Why did the FBI raid the home of a protected Clinton Foundation whistle blower? Americans want to know. (MORE BELOW.)

Chuck Grassley is not messing around!

In an exclusive last Thursday, Richard Pollock with The Daily Caller broke the news that the FBI raided the home of the whistleblower who provided documents for the Clinton Uranium One deal.

Dennis Cain’s house was raided by FBI after already handing documents to IG, DOJ, and Congress.

Cain’s Attorney, Michael Socarras said, “sixteen agents arrived at the home of Dennis Nathan Cain, a former FBI contractor,” and he told agents that he was a protected under the “Intelligence Community Whistleblower Protection Act.”

The Chairman of the Senate Judiciary Committee is not going to let the FBI do something like that without some direct answers from the top brass in the FBI. (MORE BELOW.)

Grassley goes straight to the top of the FBI – Christopher Wray.

The Daily Caller reported Grassley’s moves. First, he “sent a letter to Wray on Nov. 30 asking pointed questions about the raid on Cain’s private residence in Union Bridge, Maryland.” Then, “the Iowa Republican sent a separate letter to Horowitz on Nov. 30 seeking Cain’s documents and citing the DCNF’s reporting.”

Grassley wants answers, and the answers should arrive “no later than December 12, 2018.” Click here to see the letter.