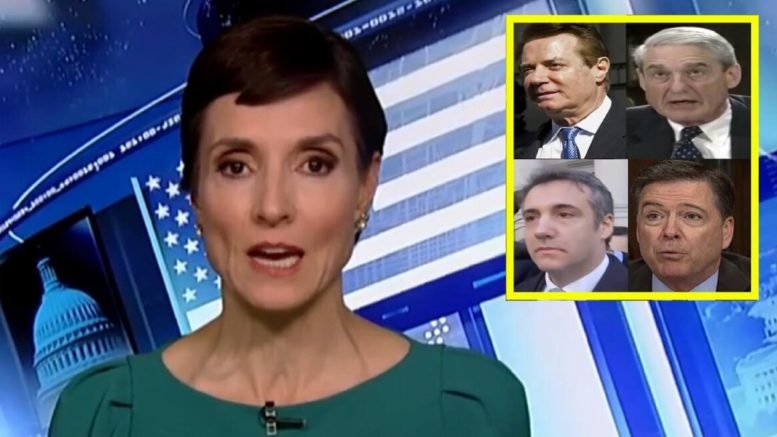 “The former Trump campaign manager Paul Manafort violated his Plea agreement. However, Manafort’s legal team argues that the special counsel used strong-arm tactics to obtain information their client does not have or evidence or evidence that does not exist.” Herridge explained.

Earlier this week, the special counsel filed the sentencing memo for former national security adviser Mike Flynn with heavy redaction’s. Further, a similar action to shield sensitive information is expected in the Manafort filing, and a separate sentencing memo for Michael Cohen. (Video Below)

In addition, after withdrawing legal efforts to try and quash a congressional subpoena, former FBI director, James Comey, will appear on Capitol Hill Friday for a rare, closed-door interview under oath with the House Judiciary Committee.

“With the special counsel prosecuting Trump associates for lying, Republicans want Comey to explain why he apparently did not pursue similar allegations against Hillary Clinton over her congressional testimony about her email use.” She added, “The Comey transcript could be released as early as Saturday.” (Video Below)

Then, Catherine Herridge dropped a bombshell where she revealed that next week Congressman Mark Meadows, Chairman of the House Freedom Caucus, will be holding a sub-committee hearing on the investigation into the Clinton Foundation.

“Tonight, Meadows confirmed to Fox News, three whistle-blowers have come forward with hundreds of pages of evidence of potential wrong doing to include: the misappropriation of funds and quid pro quo!” She declared.

(Quid pro quo is a favor or advantage granted or expected in return for something.)

“The Clinton Foundation has consistently maintained that it is a charity and never traded on Hillary Clinton’s position as Secretary of State.” Herridge concluded.