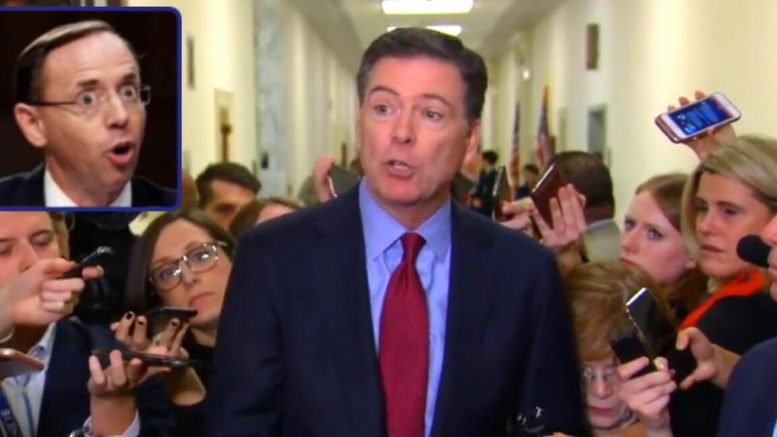 Former FBI Director, James Comey was grilled on Capitol Hill by House law makers behind closed doors on Friday to answer a number of unanswered questions over several topics.

After testifying in front of the House Judiciary Committee for nearly four and a half hours, he briefly spoke with reporters afterwards. (Video Below)

While speaking with reporters after Friday’s hearing, James Comey arrogantly put off the vibe that the hearing was mostly a waste of his time.

He announced, however, he will be returning in two weeks for more questioning behind closed doors and added, “Two things are clear to me: we could have done this in an open setting, and two, when you read the transcript, you will see that we are talking again about Hillary Clinton’s emails, for heavens sakes.”

He continued, “I’m not sure we need to do this at all, but i’m trying to respect the institution and to answer questions in a respectful way.”

Comey refused to answer questions about the Muller investigation when asked by a reporter and also explained he couldn’t talk about the details of an investigation that is still ongoing. “It began when I was FBI director, so it makes sense that they don’t want me going into those details, but that is a very tiny part of what we talked about today. It was a whole lot about Hillary Clinton’s emails, which will bore you.”

Next, when asked if he refused to answer questions during the hearing, he replied, “When you read the transcripts, I think you will not see that happening. (Related article: Rep. Issa Reveals FBI Attorney Blocked Comey From Answering Questions, Trump Promptly Responds)

Comey was asked about the firing of former Attorney General Jeff Sessions and the attacks against him for recusing himself into the Mueller investigation. “I think the President’s attacks on the Justice Department broadly and the FBI are something that no matter what political party you’re in, you should find deeply troubling, and continue to speak out about it.” He added, “not become numb to attacks of the rule of law.” (Video Below)

When asked about FISA abuse and confidence of the dossier, Comey stated that he has total confidence in the FISA process and believes that it was followed. He said, “the entire case was handled in a thoughtful and responsible way by the DOJ and FBI. I think the notion that FISA was abused is nonsense.”

He was also asked, “As a private citizen how do you think Bob Mueller’s investigation is going?” He replied as he shrugged his shoulders, “As a private citizen and someone who knows the justice system, I see it proceeding in incredibly quickly, and very, very professionally. The most important indication of that is that you don’t know anything about it, except when he files something in court, and that’s the way it should be.”

A liberal hack reporter next asked if he was prepared to return to court when the Democrats take the House and testify on questions of obstruction of justice in an impeachment case. [referring to President Trump]. “I always want to respect the institution of Congress. I’d love it if they didn’t want me to testify, but if they want me to testify and we can do it in a responsible way, I will abide it.” Comey said.

Finally, a real reporter asked Comey if he knew anything about Rod Rosenstein wearing a wire. Comey said he couldn’t commit on it and suddenly had to leave, ending the questions.

The President tweeted after the hearing, “It is being reported that Leakin’ James Comey was told by Department of Justice attorneys not to answer the most important questions. Total bias and corruption at the highest levels of previous Administration. Force him to answer the questions under oath!”