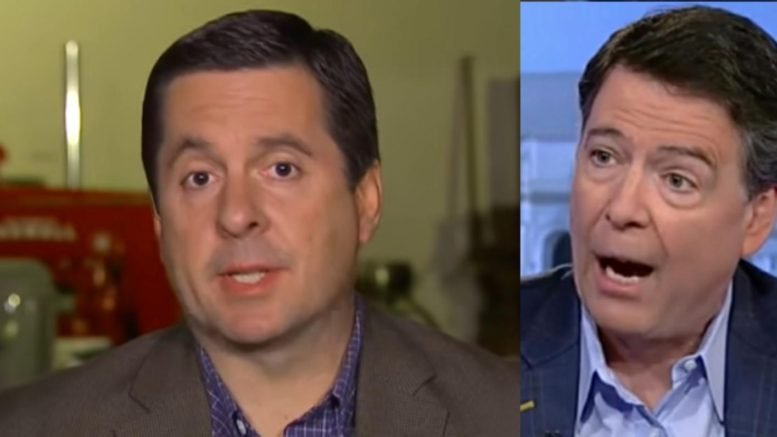 Devin Nunes joined Sean Hannity where they discussed former FBI Director, James Comey, who will be on Capitol Hill for a behind-door testimony to Congress, today.

Congress wants to ask the former FBI Director the ‘who, what, where, when and why’s’ of the Hillary Clinton email scandal and about the  FISA abuse scandal that happened under his watch. (VIDEO BELOW.)

Devin discussed the importance of the recent email chain that was discovered in those emails, and James Comey was smack in the middle of them.

“It’s possible, Sean, that there’s even more emails that we don’t even know about. But, what we are aware of is what I call the fourth bucket of information,” Devin told Sean.

“It would be very clear that there were people within the FBI and DOJ that knew – well and good – before they went to the FISA Court…. that Christopher Steele and others were up to some really bad and nefarious activity,” Devin remarked.

The bottom line to the Comey testimony.

Sean Hannity and Devin discussed the bottom line to Comey’s testimony. And in a nut shell, Sean said, “There is no equal justice, equal application of our law.’

Devin Nunes explained, “The people who signed off on the FISA documents are not the same people who are culpable. It is the ones who knew about the information that was not provided to the [FISA] Court, who are the one’s who created the fake Dossier story.”

In ending, Hannity surmised, “That would literally be shredding, shredding… if you’re giving false information  to a court to obtain a FISA warrant to spy on an American.” And this is what the Comey testimony will focus on for the American people to know what really went down in Obama’s corrupt FBI and DOJ. (VIDEO BELOW.)

Watch Devin Nunes and Sean Hannity discuss the FISA Abuse and how it relates to James Comey’s testimony.