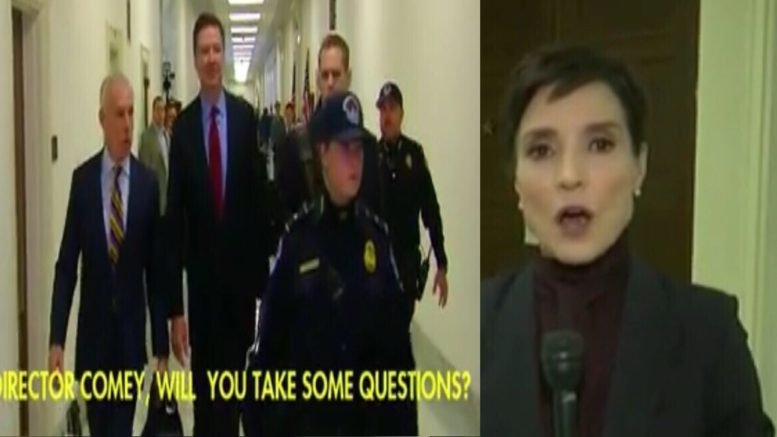 James Comey, former FBI Director during the Obama-era has been behind closed-doors in the hallowed halls of Capitol Hill for several hours.

Catherine Herridge caught up with him on his way in and he refused to speak to her. He’s not being very transparent for someone who wanted a public hearing. (VIDEO BELOW.)

Catherine Herridge, Chief Intelligence correspondent for Fox News, was standing in front of room 2141 as she reported what happened as Comey and his entourage entered the hallways on his way to the Judiciary Committee room.

As Herridge and other reporters gathered, you can see Comey turn and say, “maybe later,” but then refused to speak to Herridge as she asked if he stood by his “decisions made during the 2016 campaign.”

Catherine reviewed why Comey is in this session for testimony, and she said it is about “power and the other is about accountability, and the decisions the FBI Director made during the 2016 campaign.”

Herridge also said, “It was an extraordinary year, because the FBI was investigating Hillary Clinton’s use of a private email server for Government business, and when that criminal investigation closed. Within a few weeks, they opened a counter-intelligence investigation into the opposing campaign, Donald Trump.”  (VIDEO BELOW.)

How long will Comey testify?

Catherine reported that the session is a “closed-door transcribed interview, under oath.” The transcription from the testimony should be prepared and available to the American people by sometime Saturday.

“The key thing here – to set expectations – is that the behind close-door interview could last several hours. In fact, well into the evening is what we expect.” It appears it will be a long Friday night on Capitol Hill.

WATCH Catherine Herridge as she catches Comey on his walk to testify.