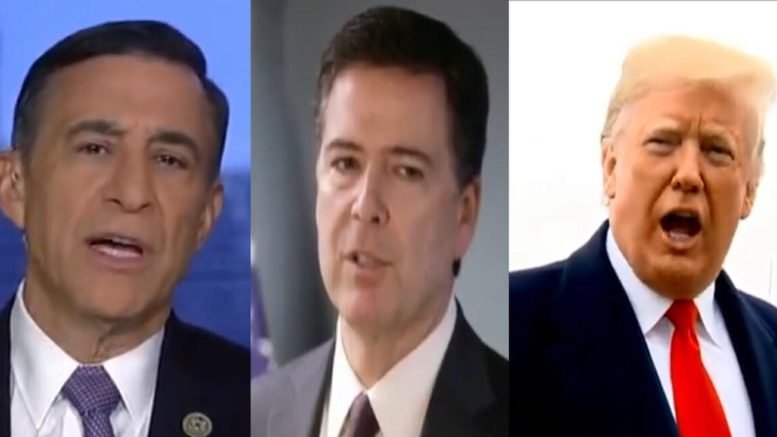 Rep. Darrell Issa (R-CA) had some choice words about Comey’s crooked actions during the hearing. (Video Below)

Rep. Darrell Issa interviewed on Fox News with Harris Faulkner Friday afternoon where he explained James Comey wanted a public spectacle that would’ve allowed five minutes with House members in a back and forth taking shots.

Referring to a public setting, Issa said, “He almost got it, because he is going to have the transcript public very shortly.”

Issa pointed out what surprised him during the hearing, “Under Trey Gowdy’s questioning and John Ratcliffe’s, it was the Justice Department, meaning that the FBI attorney that’s in there with him… that time and time again, I think to his pleasure, told him not to answer question after question that was fundamental to the investigation that brought him there.”

“Broadly those are the areas in which time and time again he is not answering. But, I can tell you in this large swath of very important information he is not saying.” Issa explained.

Issa revealed when the transcript is released to the public it will show questions asked by Gowdy about text messages between Lisa Page and Peter Strzok. He said that we may be displeased but surprised by the answers. (Video Below)

Next, Harris moved the conversation to Comey and why he leaked.

Issa said, “This is where Comey speaks out of both sides of his mouth. He doesn’t want to answer a lot of questions, even when he answers, I would call them evasive. He has been a master at leaking, and what is irritating and what I think what the American people are really upset about is the FBI will claim these privileges of ongoing of investigation, which by the way is not a legal privilege, but one they will claim.”

He continued, “And they will for their own purposes leak what they want to leak to get something and then complain about leaks.”

Shortly after the hearing was over, President Trump took to twitter to respond.

He wrote, “It is being reported that Leakin’ James Comey was told by Department of Justice attorneys not to answer the most important questions. Total bias and corruption at the highest levels of previous Administration. Force him to answer the questions under oath!”

It is being reported that Leakin' James Comey was told by Department of Justice attorneys not to answer the most important questions. Total bias and corruption at the highest levels of previous Administration. Force him to answer the questions under oath!

Watch below as Rep. Darrell Issa reveals that the FBI attorney blocked Comey from answering questions: