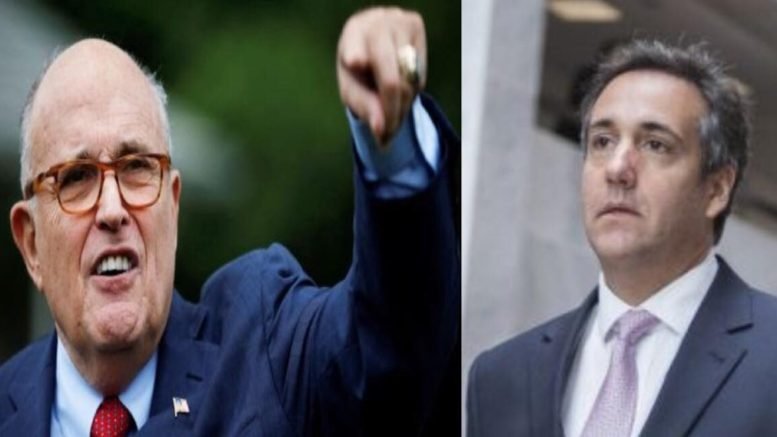 Giuliani had some choice words for Cohen in the wake of his new future.

Giuliani told the Daily Beast on Friday that Cohen is “pathetic” and claimed Trump’s former lawyer “can’t handle jail.” He admitted he felt “sorry for him,” but called his effort to avoid prison time “sad.”

Upon his sentencing, Cohen could be ultimately facing up to four years in prison for campaign finance violations he pleaded guilty to in August. The plea deal implicated the president in payoffs to two women in exchange for their silence about affairs they allege they had with the president. Trump has claimed he doesn’t know where the money came from.

In a separate case brought by special counsel Robert Mueller, who is investigating Russian interference in the 2016 election, Cohen pleaded guilty last month to lying to Congress about plans for a Trump Tower project in Moscow.

Mueller’s team suggested that any sentence related to lying to Congress could be served at the same time with the sentence he receives in the New York case, citing Cohen’s cooperation.

On Monday, Trump tweeted that Cohen should serve “a full and complete sentence.”

The President wrote on Twitter, “Michael Cohen asks judge for no Prison Time.” You mean he can do all of the TERRIBLE, unrelated to Trump, things having to do with fraud, big loans, Taxis, etc., and not serve a long prison term? He makes up stories to get a GREAT & ALREADY reduced deal for himself, and get his wife and father-in-law (who has the money?) off Scott Free. He lied for this outcome and should, in my opinion, serve a full and complete sentence.” (Continued Below)

From The Conservative Treehouse:

The US Attorney’s Office prosecuting Michael Cohen, President Donald Trump’s former longtime personal lawyer, recommended “a substantial term of imprisonment” for Cohen, who has pleaded guilty to fraud and tax charges and campaign finance crimes, as well as lying to Congress. Federal prosecutors in Manhattan suggest that Cohen should spend about three-and-a-half years in prison, although they do not provide a specific time-length recommendation. The sentencing memorandum was filed on Friday afternoon in federal court in New York. It recommends “a modest downward variance” from the recommended range of 51 to 63 months in prison. In a footnote, the prosecutors note that the probation office “similarly” recommended such a variance and noted that the ultimate recommendation by that office is for a sentence of 42 months’ imprisonment.