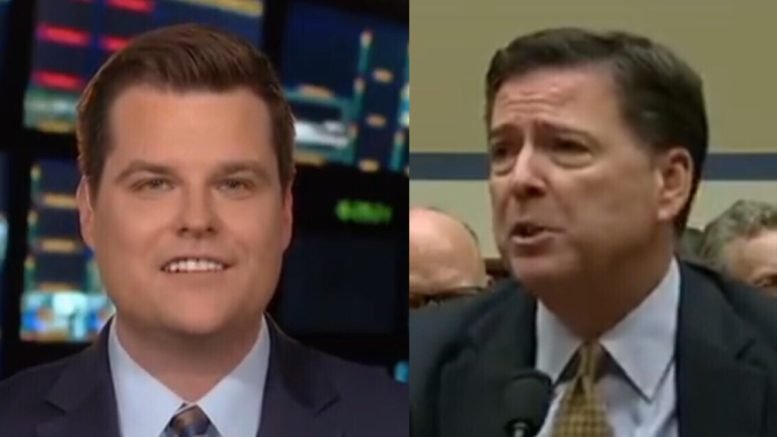 Matthew Gaetz joined Martha MacCallum on Fox News to give his reaction since he was in room 2141 of the Rayburn House Office Building where James Comey testified.

Lawmakers released a transcription of the closed-door testimony with former FBI Director James Comey on Saturday. (VIDEO BELOW.)

Matthew Gaetz reacts to the Comey testimony and said Comey has selective amnesia.

Martha asked the question everyone wanted to know which is what did Comey not want to answer today? Gaetz replied, “Well, the words that best describe Comey’s testimony today are selective amnesia.“

Martha then said that Comey commented as he was exiting the room that “the suggestion that the FISA process was abused is nonsense.”

Gaetz replied, “Well, he wouldn’t answer a lot of questions about the FISA process. But I think it’s notable that in the information presented to the FISA court there was not an accurate description of who paid for what. This is another area where Comey’s testimony today contradicted his own lawyer.”

Click here to see the 235 page transcribed interview with former FBI Director, James Comey that was released. (VIDEO BELOW.)

“One of the disappointments of this deposition so far has been the amount of times in which the FBI believes that Congress doesn’t have a right to know,” Issa told  Fox News speaking on how many times Comey refused to answer.

Additionally, it is important to note that James Comey said he was unable to answer 251 times as reported by Catherine Herridge, Chief Intelligence correspondent for Fox News.

In ending, because lawmakers were unable to ask what they wanted, James Comey will be returning in ten days for another testimony. (VIDEO BELOW.)

WATCH as Matthew Gaetz (R-FL) reacted to the Comey testimony.