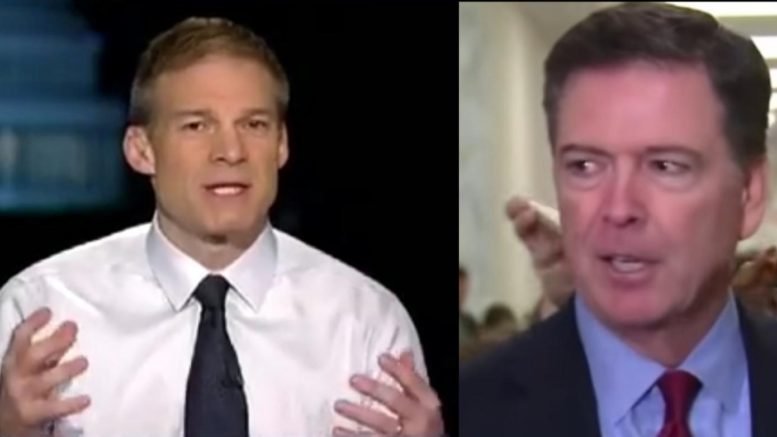 Jim Jordan (R-OH) joined Judge Jeanine Pirro on Fox News for a power packed interview on his most striking discovery during the closed-door Comey testimony.

Rep. Jordan let America know exactly what the loud silence means in Comey’s inability to answer about 250 questions. (VIDEO BELOW.)

The burning question Jordan had for Comey.

Jim Jordan was in Room 2141 of the Rayburn Office building Friday during the Comey testimony.

Disgraced former FBI Director, James Comey failed to answer about 250 questions from the joint meeting with the Judiciary and Oversight Committees.

Judge Pirro invited Jordan to give his perspective on what the lack of answers from Comey might mean. The Ohio Republican Representative figured out that Comey didn’t answer many questions about Christopher Steele.

Steele is the one who authored the unverified dirty dossier that leant credence to the FISA warrants to start the Special Counsel against the President. (VIDEO BELOW.)

“How could you not know anything about the guy who was your main source?” – Rep. Jim Jordan

“Specifically, he didn’t know much about Christopher Steele. Yet, he used his work product to go get the warrant to spy on the Trump campaign,” Jordan explained.

Jordan divulged that Comey said, “He never met Chris Steele. He didn’t know the relationship that Christopher Steele had with Bruce Ohr,” and that they were passing information to the FBI.