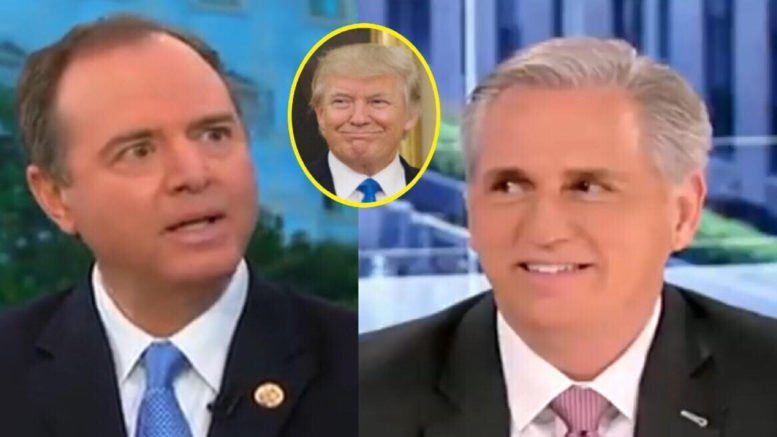 Kevin McCarthy (R-CA), the House Majority Leader since 2014 joined Fox News and reviewed the biggest issues with the Comey testimony, then proceeded to take a part Adam Schiff step-by-step.

In an epic truth throw down, the House Majority Leader explained why Adam Schiff (D-CA) no longer has credibility. (VIDEO BELOW.)

Adam Schiff sees an incitement, but for whom?

According to Adam Schiff, the President of the United States will be indicted.

The California Democrat went on record Sunday at CBS News, and he said, “my take-a-way is that there’s a very real prospect that on the day Donald Trump leaves office, the Justice Department may indict him.”

“That he may be the first President in quite some time ,” – with his voice wavering – it appeared Adam did not even believe himself, and he said, “to face the real prospect of jail time.”

“Listen, Schiff is the same individual who two years ago before any investigation started, said he had proof,” the California majority leader reminded America.

But, where is the proof? We are all still waiting! As a result, McCarthy hammers the final nail in Schiff’s coffin, “..and could never produce anything. His credibility is rather low inside Washington for his members on either side of the aisle.”

Adam Schiff does not have the support of his Washington peers and should not be taken seriously. Do you agree? (VIDEO BELOW.)