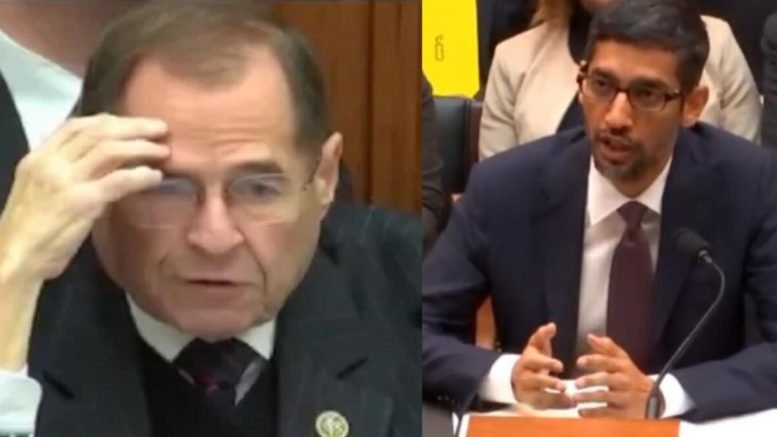 Google CEO Sundar Pichai testified before the House Judiciary Committee on Tuesday amid allegations of anti-conservative bias and privacy violations on the tech giant platform.

Pichai’s prepared remarks that were released on Monday, said the tech giant is not a haven for political bias. (Video Below)

While the Google CEO was being grilled by the House lawmakers, Rep. Jerry Nadler (D-NY) asked Sundar Pichai on Russia’s influence on Google during the 2016 election.

Nadler pulled out his ‘Russia collusion conspiracy card’ and asked Pichai, “In media reports Google found evidence that Russian agents spent thousands of dollars to purchase ads on its advertising platforms that span multiple Google products as part of the agents, the Russian agents’ campaign to interfere in the election two years ago. Does Google now know the full extent to which its online platforms were exploited by Russian actors in the election two years ago?”

Pichai responded, “We undertook a very thorough investigation and in 2016 we now know that there were two main ad accounts linked to Russia which advertised on Google for about $4,700 in advertising.” (Video Below)

That probably wasn’t what Nadler was expecting to hear. Democrats keep pulling at strings trying to find any evidence of “Russia collusion” so they can pin it on the President, but they keep coming up short.

In contrast, Hillary Clinton spent 1.2 billion on the campaign, and Trump spent 536 million. Further, only a subset of that money went to ads.

$4,700 on Google ads by Russians didn’t cause 63 million people to vote for Donald Trump. Try again Dems. (Video Below)