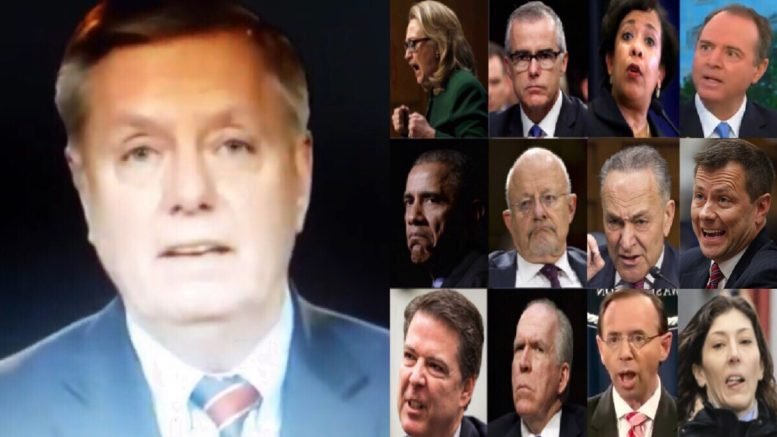 Lindsey Graham on investigating the Clinton's if he is the Chair of the Senate Judiciary Committee in the 116th Congress. Photo credit to Swamp Drain compilation with misc screen captures.

Senator Lindsey Graham (R-SC) joined Sean Hannity and discussed what he will do if he is selected Chairman of the Senate Judiciary Committee for the 116th Congress.

Lindsey Graham will not let go of what happened in the 2016 election. Comey and company are not going to be happy about what is in store for them!  (VIDEO BELOW.)

Do you want to see a second Special Counsel to investigate FISA abuse during the 2016 election?

During the power packed interview, Lindsey agreed with Hannity and said, “Well, we should have had a Special Counsel appointed a long time ago to look at ‘all things Clinton’.”

Then Graham told America what he will do as Senate Judiciary Chair, “So, here is what I will do if I am the Chairman of the Judiciary Committee in the Senate next year. I am going to look at the FISA warrant applications.”

And to back up his words, Lindsey Graham responded in a tweet when Comey said allegations of FISA abuse were non-sense.

Lindsey said, “I look forward to having an in-depth discussion with former FBI Director Comey about his assertion that challenges against the FISA warrant process – based on the Steele dossier – are ‘nonsense.’” (VIDEO BELOW.)

Graham will not allow Comey and company to slide.

Graham said, “In my view the process used to obtain a FISA warrant – and its multiple renewals – against Carter Page should disturb every American.”

Specifically, Graham pledged to the American people, “I intend to get to the bottom of what happened if I am Chairman of the Senate Judiciary Committee.” Currently, Graham “is the favorite to replace Republican Iowa Sen. Chuck Grassley as Chairman of the all-powerful Judiciary panel,” reported the Daily Caller.

Related Article: Lindsey Graham Bursts The Media’s Bubble Over Their Repulsive Behavior Towards Trump (VIDEO BELOW.)

WATCH as Lindsey Graham joined Sean Hannity to discuss what is in store for the dirty dossier Dem team.

In my view the process used to obtain a FISA warrant – and its multiple renewals – against Carter Page should disturb every American.

I intend to get to the bottom of what happened if I am Chairman of the Senate Judiciary Committee.