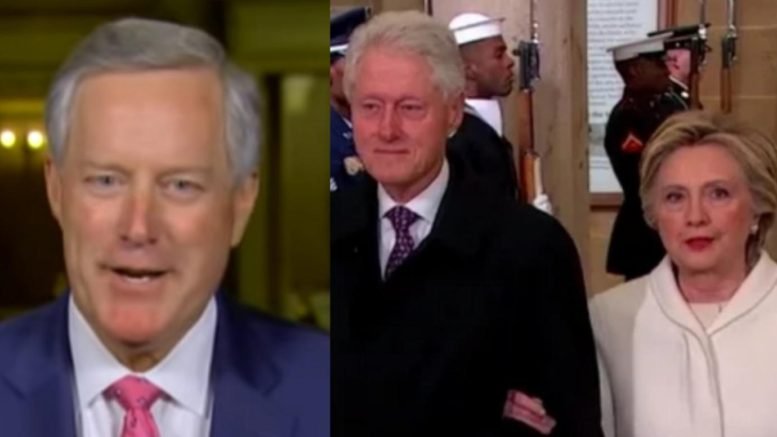 Mark Meadows (R-NC) Chairman of the House Freedom Caucus, joined Martha MacCallum for an eye-opening interview on where the Clinton Foundation investigations are going.

Meadows is not only on the short-list for the Chief-of-Staff position at the White House, he also dropped a bomb on what the Clinton whistleblowers are going to divulge. (VIDEO BELOW.)

Whistleblowers say the FBI are investigating Clinton Foundation for pay-to-play.

First, MacCallum reminded America that 6,000 pages of evidence has been given to John Huber at the FBI to investigate.

Martha also told the viewers that “the foundation raised $2.5 billion, and they’re looking into potential improprieties.”

Mark Meadows responded, “Well, I think for the American people, they want to bring some closure, not just a few sound bites, here or there, so we’re going to be having a hearing this week, not only covering over some of those 6,000 pages that you’re talking about, but hearing directly from three whistleblowers that have actually spent the majority of the last two years investigating this.”

Then he then told Martha, “Some of the allegations they make are quite explosive, Martha. And as – we just look at the contributions. Now everybody’s focused on the contributions for the Clinton Foundation and what has happened just in the last year. But if you look at it, it had a very strong rise, the minute she was selected as Secretary of State, it dipped down when she was no longer there. And then rose again, when she decided to run for president. So there’s all kinds of allegations of pay-to-play and that kind of thing.” (VIDEO BELOW.)

Martha asked, “Do any – do these whistleblowers have evidence that there was ever a quid pro quo of a donation in return for some activity as Secretary of State?”

“Well, they do. They’ve made some allegations there, and again, I want to express their allegations. And so, we’re hoping to get to the bottom of that. They’ve turned over their documents, not only to the FBI, but they’ve turned them over to the IRS,” Meadows revealed.