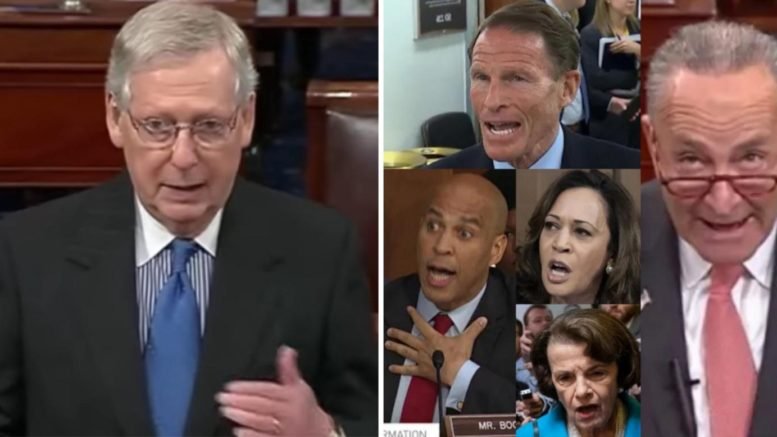 McConnell tells Senate they are expected to work through the Holiday's is they do not work together.

In the hallowed halls of the Senate chamber, Mitch McConnell (R-KY), Senate Majority Leader told the Senate exactly what they needed to hear.

McConnell, in no uncertain terms, reminded each and every Senator that their purpose is to serve We The People. (VIDEO BELOW.)

Leader Mitch McConnell called for a “reality check” and listed the work that Senate needs to get done!

Leader McConnell reminded the Senators of what needed to be accomplished before the 115th Congress adjourns.

First, he said, “we need to confirm more of the President’s nominees for the Judiciary and for the Executive Branch,” then next, “we need to reach an agreement to fund the remaining one-fourth of the Government that was not covered by regular appropriations.”

Next, he said “we need to make a substantial new investment in the integrity of our borders and the security of American families.” Yes! Fund The Wall!

Additionally, McConnell told the Senators, “we need to take up and pass the conference report for the Farm Bill – honor our commitment to our nation’s growers and producers. In this week alone, we need to dispense with the debate that pertains to situation in Yemen.”

“And an attempt by some of our Democratic colleagues to undo reforms that protect American’s private and personal information as they exercise their First Amendment rights.” (VIDEO BELOW.)

McConnell told the Senators they will work through Christmas if they do not work together!

“In addition, at the request of the President, the senate will take up the recently revised Criminal Justice Bill this month. I intend to return to the New Tax as early as the end of this week,” the Senate Majority Leader ended the list.

“So as a result of this additional legislative business, members should now be prepared to work between Christmas and New Years if necessary, in order to complete our work,” McConnell told the Senators.

That is a huge work load for our Senators, but they can do it. If you stand behind Mitch – now – is the time to call your Senator, and tell them what you would like them to do. Your voice matters. Click Senate.GOV to contact your Senator, now! (VIDEO BELOW.)

WATCH McConnell take the Senator’s Christmas vacation away if they don’t work together!