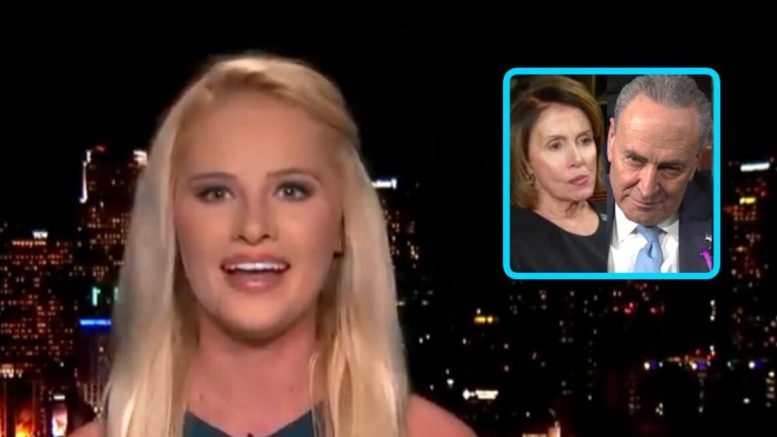 President Trump held the meeting at the White House where he invited the press and exposed the two democrats who didn’t want to debate during a live broadcast for all to see. (Video Below)

During her interview Wednesday, Tomi Lahren was asked what she thought of President Trump making Nancy Pelosi uncomfortable, who didn’t want to debate with the cameras and microphones turned on.

“Well of course she would like that,” Tomi said referring to Nancy’s comment of no cameras or microphones. “Democrats usually prefer when things aren’t transparent, but when I saw President Trump say the things he said yesterday, ‘I thought, exactly! That is the man that I voted for! We voted for the wall. We voted for someone who who is going to stand up for border enforcement, border security, and for our border protection agents.'”

“Of course, it made Chuck and Nancy uncomfortable.” Tomi pointed out and asked, “They have no problem spending tax payer dollars on illegal immigrants or other worthless projects, but they have trouble spending 5 billion dollars to secure this country and to protect American interest? I’m sorry, I think the American people are behind the President. We want the wall, and I think we are going to get the wall.” (Video Below)

During President Trump’s meeting at the White House, Nancy and Chuck kept saying they would rather debate in private. Trump shot back, “But, it’s not bad Nancy. It’s called transparency.”

Tomi responded on Fox on Friends to President Trump’s transparency, “It’s what this President has done over and over again, and he says ‘I’m gonna be direct with the American people. This is what I want, this is what you elected me to get done.'” She added, “The democrats don’t like it, but he’s gonna call them to the carpet and he’s gonna say, ‘you know what, we wanna see where you two stack up on this, and we want the American people to see where you stack up.'”

Tomi praised President Trump again for standing up and being transparent declaring, “Of course, it made them uncomfortable, but me as a Trump supporter, as an American, I loved watching it!” (Video Below)

Before ending the segment, host Steve Doocy announced that Tomi Lahren will be doing a special that will air on Fox Nation called “The Migrant Stand-Off” that debuts on Thursday.