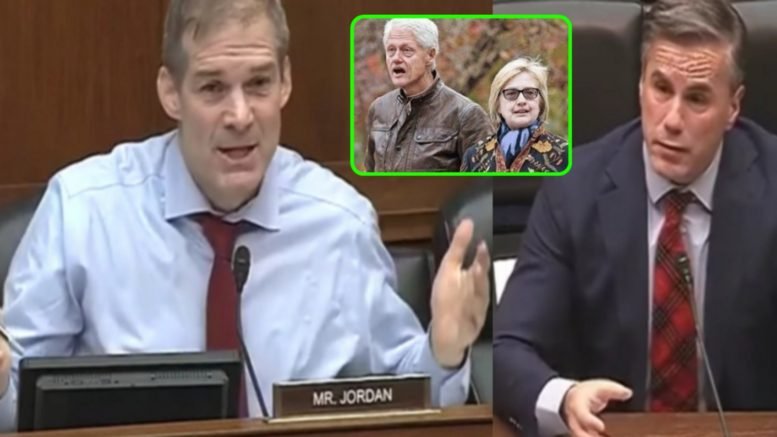 Jim Jordan and Tom Fitton display the huge differences in the way the Clinton investigations were handled versus the Trump investigations. Photo credit to Swamp Drain compilation with Screen Shots, Img Flip.

Today on Capitol Hill, the House Committee on Oversight and Government Reform met with Judicial Watch’s President, Tom Fitton to discuss the difference in the way the Clinton investigation was handled compared to the Trump investigation.

Fitton said, “if you compare and contrast the Special Counsel investigation into President Trump and his associates that’s what a real investigation looks like.” (Video Below)

Under Comey and Lynch, the basic reality is that Clinton was handled with kid gloves and was not treated the same way the Trump investigations are being handled.

At one point during the hearing, Jordan said, “I don’t remember Cheryl Mills’ door getting kicked in.”

He was referring to Manafort when the FBI showed up at his home early in the morning, and Cohen, whose homes and offices were raided by the FBI.

Yet Cheryl Mills, who was questioned about the Clinton’s server, never had her home raided, in fact, she was given immunity, as reported by the Washington Examiner. (Video Below)

Jordan puts the Obama FBI on notice with his fiery words!

“I’ve never seen this happen, Mr. Fitton, where the Director of the FBI is fired, the Deputy Director is fired, the Chief Legal counsel is demoted then leaves,” Jordan said. He then mentioned Lisa Page, FBI Legal counsel who was demoted, then left the agency. And Peter Strzok, Deputy Director of Counter Intelligence, who was demoted then fired from the FBI.

“What’s interesting is those are the same people who ran the Clinton investigation and started and launched the Russia investigation,” Jordan ended and revealed the disturbing truth of the matter. (Video Below)

WATCH as Jordan lights up the FBI and the way they handled the Clinton investigations with kid gloves.