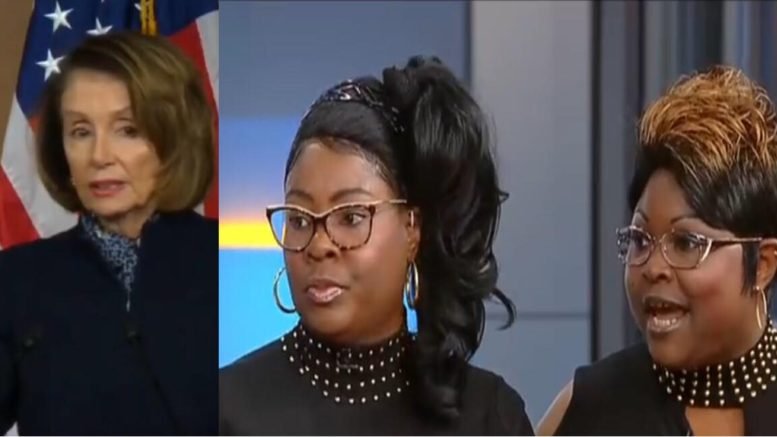 Trump supporters Diamond and Silk appeared on Fox and Friends Friday morning where they gave their take about House Minority Leader, Nancy Pelosi’s denial for the President’s request on border security.

Diamond and Silk didn’t hold back and exposed why she is a hypocrite. (Video Below)

President Trump held a meeting at the White House on Tuesday with Nancy Pelosi (D-CA) and Chuck Schumer (D-NY.) where he pledged to take responsibility if the government shuts down, adding he would be “proud to shut down the government for border security.” Further, he insisted that Democrats fund the wall or face consequences.

Pelosi revealed during a press conference on Thursday, that she will not negotiate border wall funding with the President.

Instead, she indicated to reporters that she would rather keep the “government closed forever” than send a bill to President Trump’s desk. (Video Below)

Diamond and Silk exposed her hypocrisy during their interview beginning with declaring that Pelosi is “out of touch.”

“We need the wall funded. What I don’t understand and what is so mind boggling about Nancy Pelosi and Chuck Schumer is that they live behind walls.” Diamond said.

She pointed out that they live behind walls, and asked, “so why don’t they want to protect America by building a wall?” (Video Below)

Silk noted that Pelosi and Schumer have security guards with guns and live behind walls. “If someone continues to break into my house and continue to steal my stuff, I just get a security system to keep them from breaking into my house, so I won’t have to keep paying for my stuff. And guess what? Silk asked. “The security system will pay for itself. That wall will pay for itself. Mexico is gonna pay for it, voluntary or involuntary.”

Next, the subject was turned to Pelosi’s comments where she claimed twice that people are losing their jobs if there is a government shutdown. The President, during Tuesday’s meeting, stopped her in her tracks when he reminded her that America has the lowest unemployment in 50 years.

Diamond said, “she’s talking about people that are getting their gravy trains up there cut off. The ones that were getting their kick back, patty whack, give a dog a bone. That’s not happening anymore. That’s why they’re leaving Congress.”

She explained politicians are leaving while they try to disparage, demean, and destroy the President, because they don’t like the fact that he is working for the American people versus kissing their butts.

Watch Diamond and Silk below:

Finish the wall and drain the swamp, Mr. President!