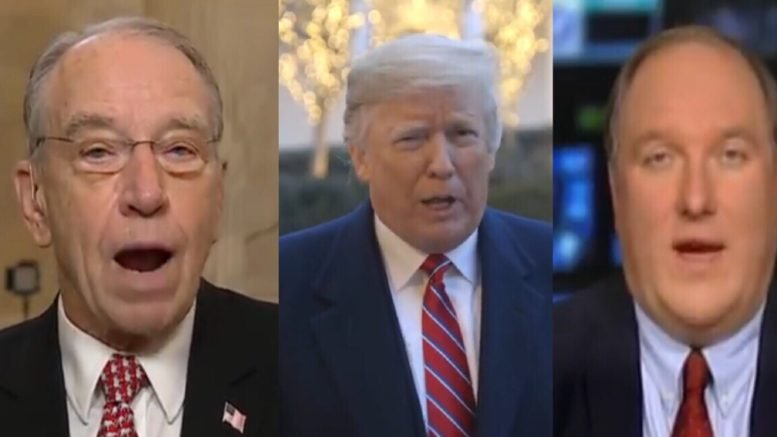 Thursday night, John Solomon of The Hill joined Sean Hannity for an incredible revelation about Michael Flynn and the potential for his exoneration.

In the wee hours of the morning, Flynn’s sister, tweeted about it and then Rep. Mark Meadows tweeted out a letter Chairman Grassley had written requesting the release of the documents to exonerate Flynn. (Video Below)

Solomon revealed who hold the documents that may exonerate Flynn.

John Solomon, Executive Vice President at The Hill, dropped a bombshell and, he started by saying, “I’ve been lucky to interview FBI Directors and former FBI Directors. I have never in my life, heard an FBI Director talk the way Director Comey did on Sunday night. It’s not the language that FBI and law enforcement use.”

He then said, “but let me say something else tonight about Mike Flynn.”

Specifically, Solomon continued, “In May of 2017, there was a document identified to us by a small number of people from the United States Government.”

“It’s in the possession of the Defense Intelligence Agency (DIA). For eighteen months there’s been an effort to resist declassifying that document,” he told the American people. (Video Below)

Solomon and company wants the message to get to the President!

“I know that document contains extraordinary exculpatory information about General Flynn,” Solomon said, “I don’t believe the President has ever been told about the existence of this document.”

“One lawmaker discovered it but he was thwarted by the Defense Intelligence Agency in his ability to disclose it,” Solomon said.

“I think we all should ask for that declassification. Get that out. And it may enlighten the Judge. It will certainly enlighten the American public,” Solomon ended.  (Video Below)

Mark Meadows tweeted who the lawmaker is!

In a tweet, moments ago, Rep. Mark Meadows (R-NC) tweeted the letter Chuck Grassley had sent asking for the document.

Meadows said, “This letter from @ChuckGrassley is critically important, asking for declassification of DIA docs on General Flynn. Americans should be able to see these documents and get the full truth about General Flynn’s involvement in this “collusion” investigation. The secrecy helps no one.”

Let’s all do our part, Patriots! Write the White House at www.whitehouse.gov or contact your Congressman at www.usa.gov. (Video Below)

SEE THE LETTER GRASSLEY WROTE ASKING FOR THE DOCUMENTS FROM THE DIA IN 2017:

This letter from @ChuckGrassley is critically important, asking for declassification of DIA docs on General Flynn. Americans should be able to see these documents and get the full truth about General Flynn's involvement in this "collusion" investigation. The secrecy helps no one. pic.twitter.com/HQSZ1g4You

SEE BARBARA FLYNN REDGATE’S PLEA TO SHARE THIS AND GET THE MESSAGE TO THE PRESIDENT!