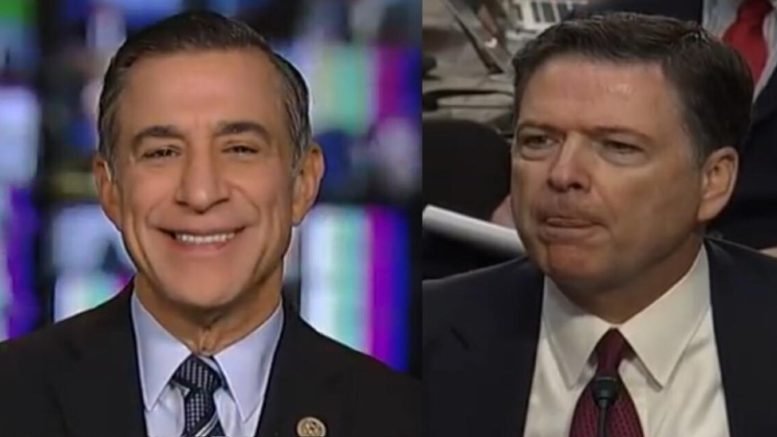 Rep. Darrell Issa (R-CA) joined Maria Bartiromo on Sunday Morning Futures where he gave insight into what questions he has for former FBI Director Jim Comey as he returns to Capitol Hill for questioning.

Comey previously testified on Capitol Hill during a closed-door interview with House lawmakers on December 7, 2018, where the following day the transcript was released to the public. (Video Below)

Rep. Darrell Issa revealed that Monday’s hearing with James Comey will be different in that new revelations have surfaced since his previous testimony.

Issa explained that in light of the misconduct during former National Security Adviser Michael Flynn’s investigation, U.S. District Judge Emmet G. Sullivan ordered Mueller late Wednesday to turn over all of the government’s documents and “memoranda” related to Flynn’s questioning.

Maria Bartiromo pointed out that during Comey’s last hearing that “he didn’t remember” or “didn’t recall” 245 times. “How are you going to get him to be honest this time?” She asked. (Video Below)

“Well, he made a comment not too long ago that they would’ve never gotten Flynn in a more organized administration, and now that Judge Sullivan has made it pretty clear that violated his Miranda rights. [They] tricked him into not having a lawyer, when in fact, he was not only a suspect but a target, and they had transcripts.” Issa explained.

He noted that this kind of conduct has not been seen in a long time and is the reason there was a decision about informing rights.

“I would not be surprised a bit if the conviction of Michael Flynn is overturned, because of the Justice Department and FBI misconduct, and in fact, we go all the way potentially to the Supreme Court with new protections when the FBI and DOJ lies to somebody and tricked them into making statements and then charges them with a lie that they entrapped them in.” Issa said. (Video Below)

Issa believes he will get more out of Comey, specially the post dating of the 302’s that were recently brought to light.

He added they will also dig deeper into into the FISA abuse that occurred. “We’re going to learn more and more, ultimately for the first time ever I believe, in the next Congress and Senate, they might actually have to go to a federal judge and say ‘lets talk about the lies that you were told.'”