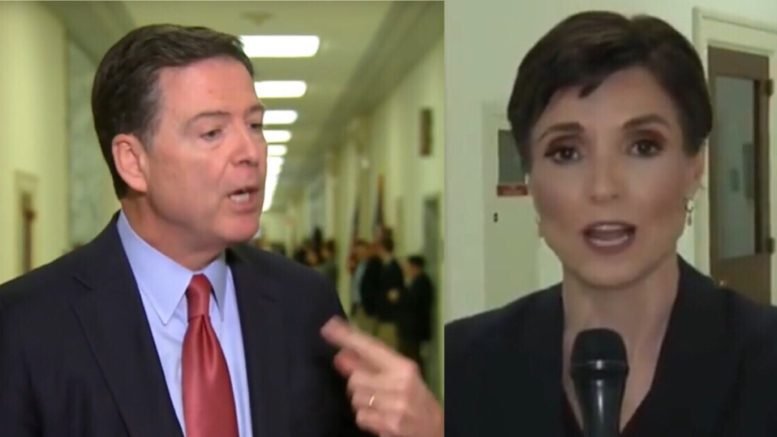 Disgraced former FBI Director James Comey, was on Capitol Hill today for the second time behind closed-doors under scrutiny from Congress.

After the second GOP deposition, Catherine Herridge, Chief Intelligence correspondent for the Fox News channel and other reporters interviewed Comey. (VIDEO BELOW.)

Comey is stopped in the hallway after his testimony by reporters.

The Republican lawmakers were questioning Comey on his handling of the Russia special counsel probe and the Clinton email scandal during the 2016 Presidential election.

Reporters caught up to the former FBI Director in the hallway on his way out of the building.

The embattled former FBI Director had no problem getting in front of the camera for National face-time so he could spin his narcissistic perspective which aligns with the leftist media agenda.

At one point, he even turned to the camera and told America that the “FBI has taken a big hit because the President of the United States with his accolades has lied about it constantly.” (VIDEO BELOW.)

Disgraced former FBI Director James Comey will not take responsibility for his actions.

Rather than take responsibility for his part in the corruption that occurred under his watch, Comey tried to blame the Trump administration instead.

After the former FBI Director maligned General Flynn, at the end of the interview, Comey refused to answer the question when asked, “as to acting Attorney General Matt Whitaker, do you have confidence in him?”

James looked smug as he replied, “no comment.” During the interview, Comey appeared arrogant and completely biased against President Trump and in turn the American people who voted him into office. (VIDEO BELOW.)