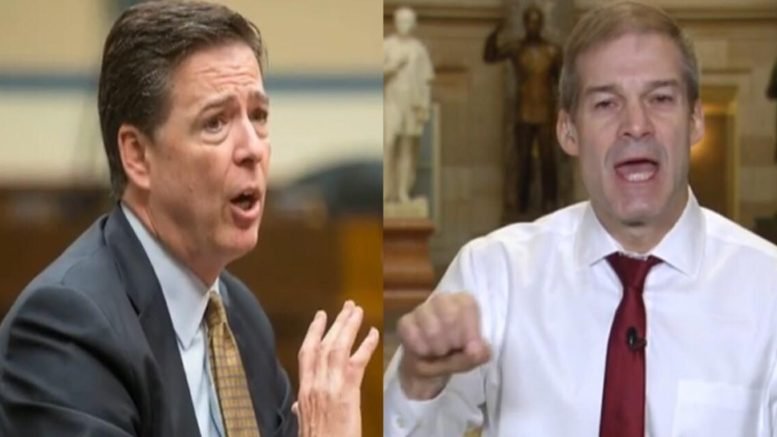 Former FBI Director James Comey is on Capitol Hill for a second hearing where House lawmakers will ask him more questions behind closed doors.

Rep. Jim Jordan (R-OH), appeared on Fox and Friends Monday morning, before the hearing, to explain what direction he will be taking with Comey. (Video Below)

Former FBI Director James Comey testified on Capitol Hill December 7th behind closed doors, and the chairmen of the House Judiciary and House Oversight and Government Reform Committees released a transcript of an interview the following day.

Comey appeared in response to a subpoena for his testimony. The former FBI chief initially sought a public hearing before the committees, which are investigating the FBI’s handling of the Clinton email and Trump-Russia investigations. But after a brief legal battle, Comey agreed to appear behind closed doors for an interview, on the condition that a transcript of the proceedings be released within 24 hours, per the Daily Caller.

Rep. Jim Jordan explained what he will be asking Comey on Capitol Hill and began, “We hope he answers questions today. Last time, 245 times he said he didn’t know, couldn’t remember.” (Video Below)

Jordan revealed he will ask Comey about the “Comey memos,” what he wrote in them, which includes seven of them, and when Comey met with President Trump and the Chief of Staff.

He pointed out last week when Comey confessed that he “got away with not following rules when they interviewed Mike Flynn,” along with taking over for Loretta Lynch on the Clinton investigation and handled it himself. (Video Below)

Further, Jordan noted the contrast of how Comey handled the Clinton investigation where he called it a matter, yet seven different times in the “Comey memos” he talked and interacted with President Trump, he referenced the fact that Trump wasn’t under investigation.

“He wouldn’t say that though. He allowed the country to think that he was,” Jordan explained referring to Comey and President Trump on a possible investigation.