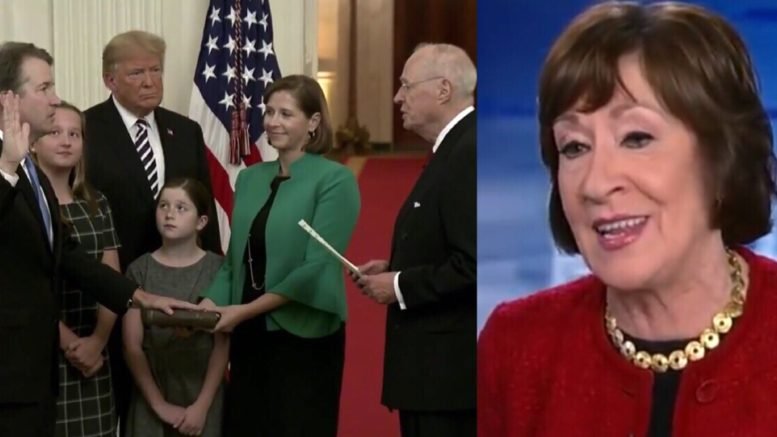 Senator Susan Collins (R-ME) joined Martha MacCallum on Fox News for a riveting follow-up on what she endured during the Kavanaugh hearing before she “gave a speech that was heralded as one of the best ever in the history in the deliberative body.”

What Collins went through could have been lifted directly from the pages of a bestselling spy novel. There were possible poisonings, threats to young staffers. And even men meeting Collins on dark rainy streets late at night…all to pressure her to change her vote. (Video below.)

The vote to confirm Justice Kavanaugh as Supreme Court Justice came down to Susan Collins.

Prior to her stunning speech – which is below in a video if you missed it – Susan Collins endured harassment from the left that is almost unbelievable.

It is truly the stuff that espionage thrillers are made out of. Except, it is real life. Right here in the United States.

Susan told Martha details that she had told no-one before. In an exclusive interview Martha recounted that “men in hazmat suits [were] sent to her home after one envelope was discovered that could have contained ricin and another with white powder and a chilling note.”

Susan said, “what was even worse was what was done to my Staff. They had to be subjected to all sorts of abuse. A twenty-five year old case worker…answered a call in which the man told her that if I voted YES for Justice Kavanaugh that he hoped she would be raped and impregnated. And unfortunately, I lost that staffer. She just could not take the tremendous abuse that was heaped upon them.” (Video below.)

More abuse from the left and less decorum in Washington D.C.

In a truly frightening episode in Collins’ real life, she described a truly disturbing evening on the way home after working late until about 9:30 p.m. Far after it was dark outside, she drove herself home.

Susan said, “there was a man who had been waiting there for me, in the pouring rain and dark. I look around the streets. There’s nobody else out. And he follows me to my house. He started screaming at me…shines a flashlight in my eyes. [He] turns on a camcorder and it was…frightening.”

In ending, Susan said, there “has been a steady decline in the dignity and decorum of the nomination process for the supreme court nominees over the passed three decades.” Collins really did deliver a brilliant speech and it is available at the bottom of the article. Also, her exclusive interview with Martha, is down below. Don’t miss it!

WATCH THE VIDEO BELOW AS Susan Collins describes what she endured during the Kavanaugh hearing.