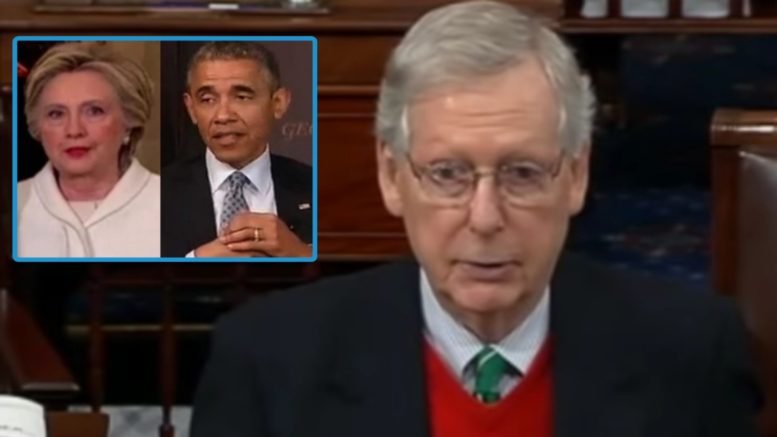 McConnell calls out Schumer, Obama and Clinton when they voted for physical barriers at the border in 2006. Photo credit to Swamp Drain compilation with screen grab.

The government is in shut down and the left-wing politics behind it are glaringly apparent, especially after McConnell lit them up on the Senate floor!

Leader Mitch McConnell (R-KY) wiped the Senate floor with the hypocrisy of the left. He easily referenced their former voting records on physical barriers in the not so distant past! (VIDEO BELOW.)

On the Senate floor, Leader McConnell pointed out the Democratic hypocrites including Schumer, Obama and Clinton!

During his time on the floor to avoid a government shut down, Leader McConnell shined light on Democratic leaders and their prior voting records.

He said, “back in 2006, Democrats were perfectly happy to support hundreds… hundreds of miles of physical barriers along the border.”

“Twenty six Democrats voted for the Bill: including then Senator Obama, then Senator Clinton, and my good friend, the current Democratic leader from New York, [Chuck Schumer],” McConnell said.

“But, what about more recently? Earlier this very year – this year Mr. President – the Democratic leader offered 25 billion for physical barriers in his negotiations with the President,” McConnell reminded everyone that Schumer’s current posture appears political. (VIDEO BELOW.)

Schumer knows if President Trump gets the wall for the American people, the Democrats will have an even more difficult time winning 2020.

McConnell continued, “Five times. Five times as much as the White House is reasonably requesting – right now. And that was just earlier this year.”

“Republicans in the House and in the Senate believe that the House’s provisions of 5 billion dollars in the border funding, plus additional disaster funding was completely reasonable,” McConnell emphasized to highlight how unreasonable the Democrats are about shooting the funding for the wall down.

In ending, McConnell said proudly, “I was glad to vote to advance that legislation yesterday. My colleagues and I are proud to stand with the American people on this subject. For the safety of the American families and the health and security of our communities.” (VIDEO BELOW.)

The Democrats would not fund; the government is shut down.

The Democrats had no problem shutting down the government instead of funding 5 billion for the wall.

Chad Pergram, who covers Congress for Fox News tweeted, “the vote was 48-47 with Pence’s ballot & was the longest vote in Senate history.”

Chad also said, “Sen. Doug Jones (D-AL) voted yes as did Sen. Jeff Flake (R-AZ), which was key. McConnell: When an agreement is reached it will receive a vote here on the floor Senate now formally on the bill.” (VIDEO BELOW.)

WATCH Mitch McConnell point out the elephant in the room regarding prior votes on physical barriers at the border by Democrat leaders!

The vote was 48-47 with Pence’s ballot &was the longest vote in Senate history.

McConnell:
When an agreement is reached it will receive a vote here on the floor

Senate now formally on the bill