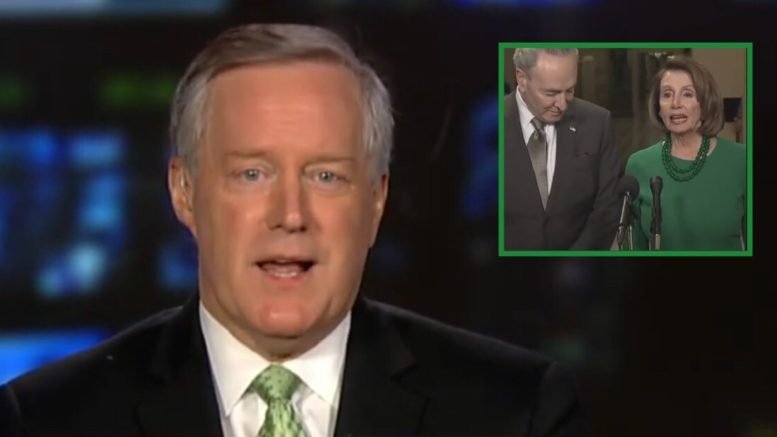 Representative Mark Meadows (R-NC) joined Maria Bartiromo on Sunday Morning Futures for an exclusive interview and they discussed the partial government shut down and funding for the wall.

Maria mentioned that Mark Meadows had been with the President on Saturday for lunch and Meadow’s dished his take-a-way. Also, President Trump tweeted early this morning on the Wall. (Video below.)

Starting off the interview, Maria reminded everyone Nancy Pelosi said the wall was “immoral.” But if it’s immoral to have a wall, then it’s moral to not have a secured border? Her logic seems twisted.

Maria asked the Congressman where are the negotiations now? “What are the sticking points now?” Why isn’t funding for the wall being passed in the Senate?

“Well, I think the sticking point is that Nancy Pelosi is driving most of this negotiation. You would think it would be Chuck Schumer. But I can tell you, based on conversations I’ve had as recent as this morning, it seems like Nancy Pelosi is actually the leader… the Minority Leader in the Senate!” Meadows said.

“So they’ve come to an impasse,” Meadows continued, “this is all about trying to make sure that Donald Trump does not secure the border. And it’s really more out of their dislike for this President than it is about the communities that they should be upholding -to make sure that they’re safe.” (Video below.)

It’s about the safety of Americans and not about a political party and their ideology.

To drive the point home on the importance of a wall, the President tweeted early Sunday morning, “The only way to stop drugs, gangs, human trafficking, criminal elements and much else from coming into our Country is with a Wall or Barrier. Drones and all of the rest are wonderful and lots of fun, but it is only a good old-fashioned Wall that works!”

Maria wanted to know how the Senate might vote after they come back from Christmas break on December 27th. Once the Democrats are in power in January it will be more difficult, she maintained.

Mark replied expertly, “I think cooler heads need to prevail.” If you would like the wall to be built, then contact your Senator. Click here for quick information on the official website at senate.gov. (Video below.)

The only way to stop drugs, gangs, human trafficking, criminal elements and much else from coming into our Country is with a Wall or Barrier. Drones and all of the rest are wonderful and lots of fun, but it is only a good old fashioned Wall that works!