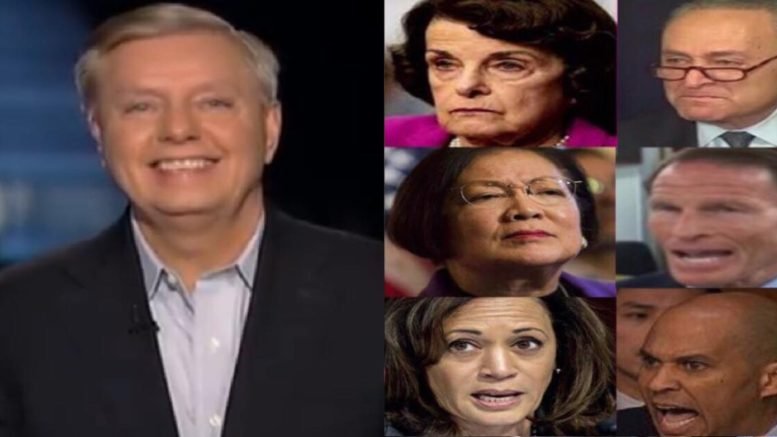 The Senate adjourned Saturday afternoon with no deal. (Video Below)

Sen. Graham announced Saturday night that “we are not going to abandon the wall, we’re going to build the wall,” after Senate minority Chuck Shumer (D-NY) declared on the House floor for President Trump to “abandon the wall.”

He said, “we need more money for the wall along the border,” but Schumer wants to abandon the wall. “We want to build it; that’s what this fight is all about. It really is a silly, petty fight on behalf of democrats.” Graham added.

The South Carolina Senator pointed out democrats voted for $25 billion for the wall, and border security in February.

Then, he explained what recent events have occurred at the southern border wall: a pregnant woman climbed over the current wall/fence giving birth, along with another putting an eight month old under the wall to cross into the United States illegally. (Video Below)

Graham looked into the camera where he addressed Schumer and asked, “What does it take for you to realize we need more money for a broken border?” He added, “This is about them hating Trump so much, wanting him to loose, they can’t understand that America needs to win, and we’re not going to give in! I’m a pretty reasonable guy, but we’re not going to give in on this.”

Judge Jeanine asked Graham how he is preparing to convince nine Democrat Senators to vote for the wall, and he confidently responded, “We’re going to go on TV and say to the American people ‘that we need more money for wall funding, because the threats against the country are greater, not smaller, and the President asked for 1.6 billion.'”

“Democrats agreed to 1.6 billion. The difference between 1.6 and 5 billion is very small in a 3 trillion dollar budget. Every Democrat in February voted for 25 billion for wall funding. We are gonna make the case- that this is unreasonable, and it is dangerous,” he added. (Video Below)

“We did lose the House in 2018, but I promise you this: the issue of securing our border is alive and well, but when Chuck Schumer tells the President he demands that ‘he abandon this wall,’ President Trump should listen to your opening statement, and I believe he will.” He said referring to Judge Jeanine.

“I’ve never seen the President more determined to get something done than to build this wall.” Graham said as he praised the President’s continuous efforts on border security.

Further, Sen. Lindsey Graham took to Twitter Saturday night and wrote, “We are not going to ABANDON the wall. We are going to BUILD the wall!”

We are not going to ABANDON the wall.

We are going to BUILD the wall!