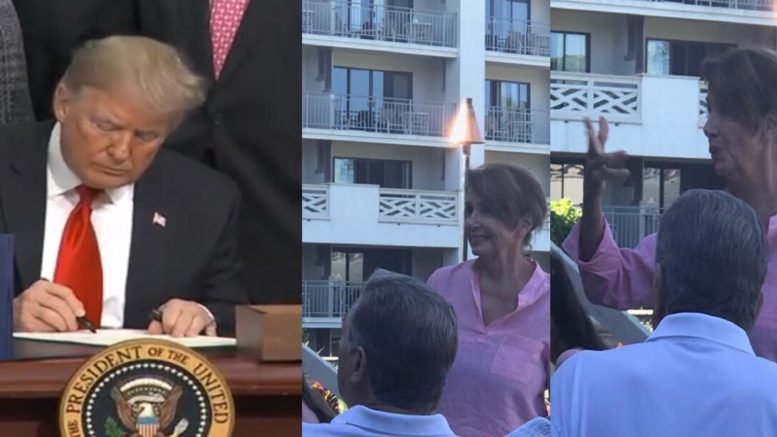 Pelosi was spotted Thursday vacationing in Hawaii at the Fairmont Orchid resort during the partial government shutdown paid for by taxpayers. (Video Below)

President Trump canceled his Christmas trip to Mar-a-Lago to work during the government shutdown, further, he canceled his annual New Years Eve party in Mar-a-Lago as well.

However, amid the shutdown, House Minority Leader Nancy Pelosi was spotted on Thursday vacationing at a four-diamond resort in Hawaii despite an ongoing battle in Washington, D.C., that led to a government shutdown.

Pelosi is lavishly spending her holiday at The Fairmont Orchid resort on Hawaii’s Big Island, according to The Washington Free Beacon. A standard room at the luxury resort starts at just under $1,000 per night and accommodation can cost nearly $5,000 per night for the presidential suite.

The oceanfront resort boats six restaurants, a golf course and a “Spa Without Walls” where a couple’s massage runs as high as $569. (Video Below)

The House passed a stopgap funding bill on Dec. 20 that included $5.7 billion to construct a wall on the U.S.-Mexico border, however, with a 51-seat majority, Republicans fell short of the necessary 60 votes needed to send it to President Donald Trump’s desk for signature. Senate Minority Leader Chuck Schumer vowed to kill the legislation on arrival in the Senate, and consequently, a government shutdown has been in effect since funding expired Dec. 21, according to the Daily Caller.

Pelosi and Schumer issued identical statements on Christmas Eve accusing President Trump of “plunging the country into chaos,” and holding the president solely responsible for the shutdown.

However, the President canceled his trip to Florida so that he would be available in D.C. in the event that Congress would reach a deal to fund the government. (Video Below)

The President tweeted, “I am all alone (poor me) in the White House waiting for the Democrats to come back and make a deal on desperately needed Border Security,” Trump tweeted. “At some point the Democrats not wanting to make a deal will cost our Country more money than the Border Wall we are all talking about. Crazy!”

(Related Article: While Trump Spends Christmas At WH, Melania Does The Incredible To Make His ‘Home Alone’ Extra Jolly)

At the same time, Pelosi has referred to a border wall as immoral and reportedly walked away from further shutdown negotiations.

“The administration understands this crisis and made a reasonable, common-sense solution to Democrats five days ago — we’ve not received a single response,” White House Press Secretary Sarah Huckabee Sanders said in a statement. “The president and his team stayed in Washington over Christmas hoping to negotiate a deal that would stop the dangerous crisis on the border, protect American communities, and re-open the government,” reports the Daily Caller.

BREAKING: Trump on vacation in Hawaii at $899-5k/night resort during shutdown, instead of working! Media will go WILD!

Oh, actually it’s Pelosi at the luxe hotel in Hawaii while President Trump IS WORKING for the people! Media silent 🤷‍♀️

.@NancyPelosi just hanging out in Hawaii during the #GovernmentShutdown This seems to be a tradition. https://t.co/14Vu3l7xn3 pic.twitter.com/dHdTzt9egZ