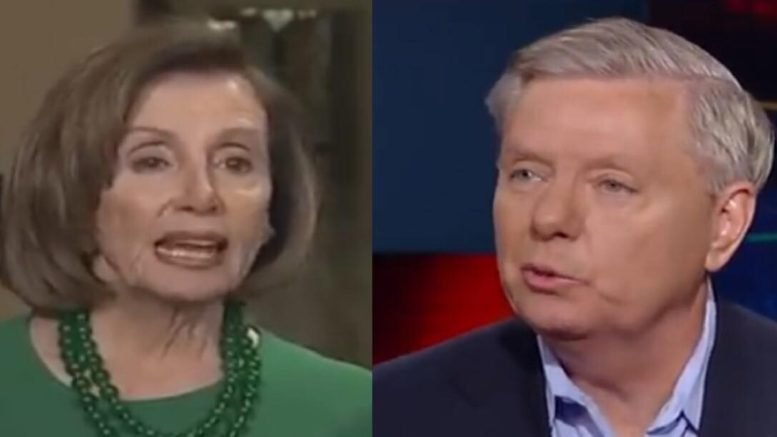 Sen. Lindsey Graham, (R-SC) took to Twitter Friday morning amid Nancy Pelosi’s Hawaii getaway during the government shutdown. He pushed back at the House Minority Leader and her Democratic House pals in a tweet over the border wall.

Graham has been a vocal advocate for building a wall. In early December, he urged President Trump to stand strong and require at least $5 billion for border funding.

Sen. Lindsey Graham told House Minority Leader Nancy Pelosi and her Democratic House pals on Friday that there would not be a deal on a funding bill unless it included the amount needed to construct a wall on the southern border.

Graham wrote on Twitter Friday morning, “To Nancy Pelosi and the House Democrats: No Wall Money, No Deal.”

The House passed a stopgap funding bill on Dec. 20 that included $5.7 billion for a border wall, however, with a 51-seat majority in the Senate, Republicans fell short of the necessary 60 votes needed to send it to President Donald Trump’s desk for signature, reported the Daily Caller.

Senate Minority Leader Chuck Schumer promised to kill the legislation on arrival in the Senate, and consequently, a government shutdown has been in effect since funding expired Dec. 21. (Continued Below)

Pelosi has reportedly walked away from further shutdown negotiations and pledged not to appropriate a single dollar toward funding a wall as she lavishly vacations on taxpayer dollars in Hawaii, during the partial government shutdown.

After Senate minority Chuck Shumer (D-NY) declared on the House floor for President Trump to “abandon the wall,” Sen. Lindsey Graham said on Twitter, “We are not going to ABANDON the wall. We are going to BUILD the wall!” (Continued Below)

“We need more money for the wall along the border,” but Schumer wants to abandon the wall. “We want to build it; that’s what this fight is all about. It really is a silly, petty fight on behalf of democrats.” Graham said last Friday speaking with Judge Jeanine.

The South Carolina Senator also pointed out democrats voted for $25 billion for the wall, and border security in February.

(Related Article: Sen. Graham Lays Out What Strategy He Will Take To Persuade Dems To Vote For Wall Funding)

To Nancy Pelosi and the House Democrats:

No Wall Money, No Deal.

We are not going to ABANDON the wall.

We are going to BUILD the wall!