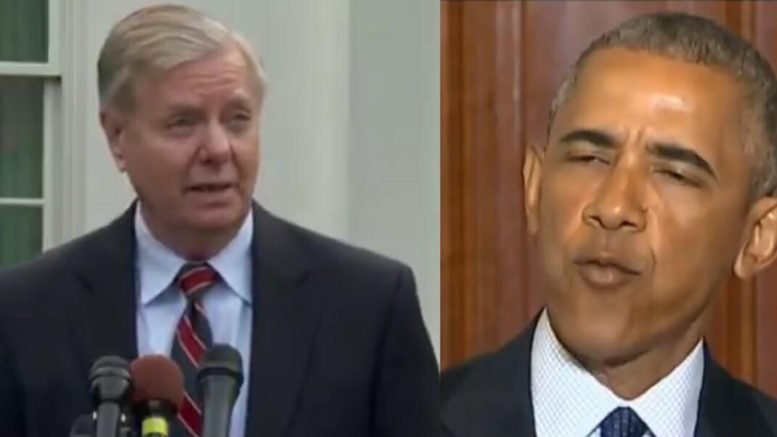 He gave a brief news conference and said, “I feel pretty good about where we’re headed” in Syria after implying that President Trump is reconsidering the planned pullout. (Videos Below)

Sen. Lindsey Graham came out the White House after a two-hour lunch with President Trump and said the President “told me some things I didn’t know that make me feel a lot better about where we’re headed in Syria.”

He continued, “He promised to destroy ISIS. He’s going to keep that promise. We’re not there yet. But as I said today, we’re inside the 10-yard line and the president understands the need to finish the job.”

Earlier Sunday, Graham spoke with host Dana Bash on CNN’s “State of the Union” where he had a different tune. “If we leave now, the Kurds are going to get slaughtered.”

“He’s frustrated. I get it. People should pay more. They should fight more,” Graham said. “But we’re not the policemen of the world here. We’re fighting a war against ISIS. They’re still not defeated in Syria. I’m asking the president to make sure that we have troops there to protect us. Don’t outsource our national security to some foreign power. If we leave now, the Kurds are going to get into a fight with Turkey, they could get slaughtered.” (Videos Below)

According to Fox News, in his interview with CNN, Graham also characterized former President Barack Obama’s justification for pulling troops out of Iraq in 2011 — a move widely credited with allowing the rapid rise of the terrorist group ISIS there — as a “bunch of bullsh–, pardon my French.”

Graham rejected the idea that the 2008 U.S.–Iraq Status of Forces Agreement, signed by President George W. Bush, had forced Obama’s hand. The agreement called for all U.S. forces to leave the country by the end of 2011, reported Fox News.

“That’s a complete and absolute lie,” Graham said. “I was there, talking to the prime minister of Iraq… Obama wanted to get to zero. He got to zero. October 21, 2011, I said I hope the president is right, but I fear this decision will come back to haunt us. ISIS came about as a result of our withdrawal from Iraq. Everything we’re dealing with today falls on Obama’s watch,” Graham added. “He’s the one that withdrew from Iraq.” (Videos Below)

Graham said outside of the White House that the Kurds “stepped up when nobody else would” to fight ISIS.

“The last thing in the world we want is a war for Turkey and the Kurds. That takes pressure off ISIS. The last thing we want in addition to that is Iran to be the big winner here. So I think the president’s going to finish the job when it comes to ISIS. I share his goal to withdraw our forces from Syria. I just want to do it in a smart way to make sure that Iran’s not the big winner.” He said.

After lunch with the president, Graham said that he thought Trump’s post-Christmas visit to Iraq was “eye-opening.”

“So the president assured me that he’s going to make sure he gets the job done and I assured him that nobody has done more to defeat ISIS than he has,” Graham added.

Graham later tweeted: “I learned a lot from President @realDonaldTrump about our efforts in Syria that was reassuring.”

“The President will make sure any withdrawal from Syria will be done in a fashion to ensure: 1) ISIS is permanently destroyed. 2) Iran doesn’t fill in the back end, and 3) our Kurdish allies are protected.”

“President @realDonaldTrump is talking with our commanders and working with our allies to make sure these three objectives are met as we implement the withdrawal.”

CNN's Dana Bash on Obama pulling out of Iraq: "But he did it because there was a status of forces agreement with Iraq, right?"

Sen. Lindsey Graham, who criticized President Trump's withdrawal of troops from the Middle East, says Trump today told him "some things I didn't know that make me feel a lot better about where we're headed in Syria" pic.twitter.com/HBbvzirDfO

I learned a lot from President @realDonaldTrump about our efforts in Syria that was reassuring. (1/3)

President @realDonaldTrump is talking with our commanders and working with our allies to make sure these three objectives are met as we implement the withdrawal. (3/3)