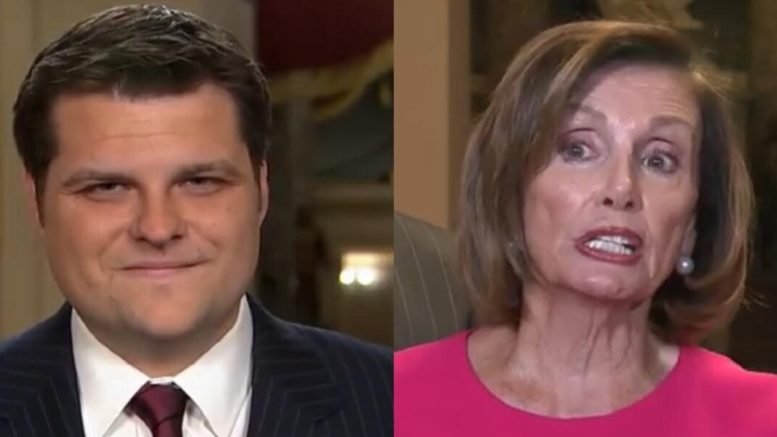 As the Nancy Pelosi reclaimed the speaker’s gavel Thursday, the 78-year-old congresswoman from California, is now Speaker of the House.

In honor of her new role, Rep. Matt Gaetz took to twitter with her greatest gaffes. (Video Below)

Rep. Matt Gaetz posted a video on Twitter in honor of Nancy Pelosi reclaiming the gavel.

It goes on to show Pelosi talking about tax cuts, and she compared it to a bowl of doggie doo. “Put a cherry on top and call it a sunday,” she announced. (Video Below)

The video continues where 12 times Pelosi said the Affordable Care Act was “affordable.”

“We have to pass the bill, so you can find out find out what is in it.” Nancy Pelosi said about the Affordable Care Act the video displayed next. (Video Below)

The next part of the video, Huckabee said, “All we need to do is take her words, put it on television and play it over and over again.”

Matt Gaetz tweeted along with the video, “In honor of our new @WSpeakerPelosi, here are some of her “greatest” gaffes: #116thCongress #SpeakerPelosi”

In honor of our new @SpeakerPelosi, here are some of her "greatest" gaffes: #116thCongress #SpeakerPelosi pic.twitter.com/HRFImygg6R