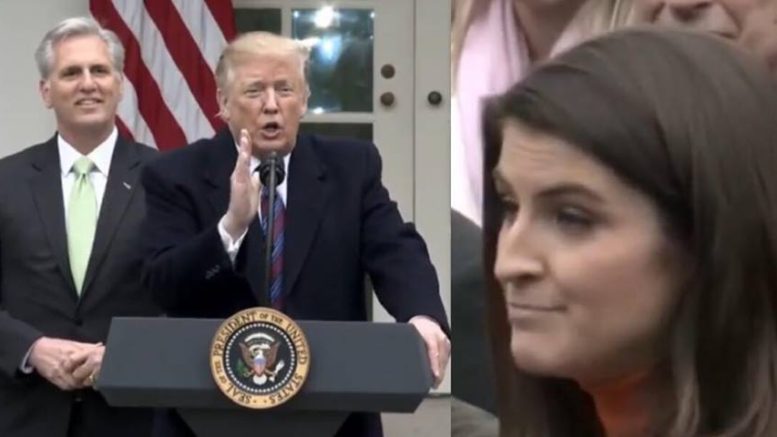 President Trump held a news conference in the Rose Garden after meeting with congressional leaders at the White House on Friday.

Amid the government shutdown, the President doubled down on his stance for border security and the wall, even suggesting he would consider using his presidential powers in calling for a national emergency to secure the border. (Video Below)

The Commander in Chief said during the news conference that he is considering declaring a national emergency to circumvent congressional approval to allocate funds for border wall.

The President was asked by CNN reporter, Kaitlan Collins, during the news conference about Mexico paying for the wall and building a “concrete wall.” (Video Below)

“You ran your campaign promising supporters that Mexico is going to pay for the wall and that the wall was going to be made of concrete. You just said earlier that the wall could be made of steel, and right now our government is shut down over a demand from your administration that the American taxpayer pay for the wall. So, how can you say you’re not failing on that promise to your supporters?” Collins smugly asked President Trump.

The President responded, “Oh here we go.” Then he added, “Very nice question, so beautifully asked, even though I just answered it.” President Trump said after he did answer a question previously about building a wall with steel.

The CNN reporter rudely interrupted the President and blurted out, “You did not answer it. The USMCA has not even passed in Congress yet, sir.” (Video Below)

Trump shot back while Collins interrupted him and said, “Excuse me, excuse me. Are you ready?”

“I just told you that we made a trade deal and we will take in billions and billions of dollars far more than the cost of the wall. The cost of the wall is peanuts compared to what the value of this trade is to the United States.” He said.

“If I build a steel wall, rather than a concrete wall, it will actually be stronger than a concrete wall. Steel is stronger than concrete, okay. You can check it out. Listen, if I build a wall and the wall is made out of steel, instead of concrete, I think people will like that. And, here’s the other good thing: I’ll have it done by the United States Steel corporation by companies in our country that are now powerful, great companies again.” He said.

The President bragged that the steel companies have become powerful because of him and the trade policies he’s put forth.

He added, “So, if I have a steel wall, or you can call it a steel fence, it will be more powerful than any of the concrete walls that we’re talking about. It’s possible it will look better, and one of the things… I think you have seen this that’s very important for us, very, very important… in speaking to border control, ICE and actually law enforcement and even military, they want to be able to see through it. You can’t really see through a concrete wall. They want to be able to see who’s on the other side of the wall.”

“I think that’s what the democrats prefer, and if it can get them there, then I’m okay. It actually will be a more powerful wall, and it will be a more beautiful wall than having a concrete wall.” He concluded.

Collins yelled out another question, but President Trump ignored her ignorance and bias and the microphone was taken away from her. She got Acosta’d. (See second video)

President Trump ignores her second question and the mic is taken away from her: