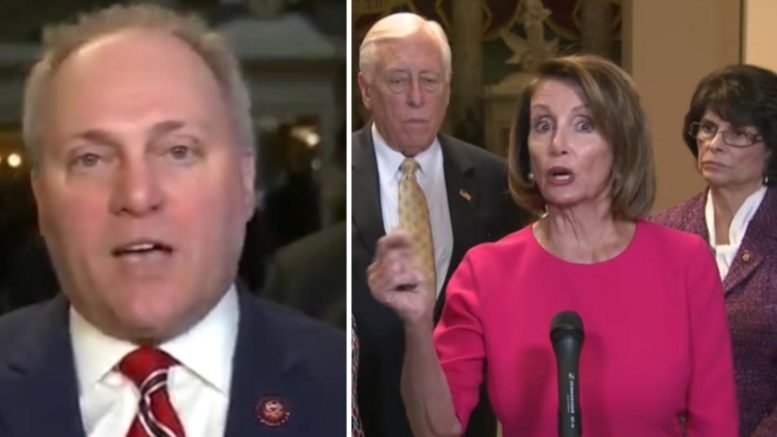 Steve Scalise weighs in on Democrat obstruction of the Wall. Photo credit to Swamp Drain compilation with screen shots.

Steve Scalise (R- LA) is a very lucky man and he is a lawmaker with a sense of clarity.

After all, he survived a gun shot wound from a crazed “left-wing activist” intent on harming Republican lawmakers as they practiced for the Congressional Baseball game in June of 2017. (Video below.)

12 Billion to foreign aid and 0 for the Wall.

It’s clear to the American people that Nancy Pelosi is strictly playing partisan politics with our safety. Most American’s do not have a house behind a great border wall like Nancy’s Napa Valley estate.

“We the people” do not want drugs and human traffickers able to cross onto our lands unhindered. Not to mention the criminal elements like terrorists sneaking across our borders.

Additionally, Scalise added, “I think that shows a clear difference in priorities and approaches to what President Trump want’s to do to keep the Country safe versus what Nancy Pelosi wants to do .” (Video below.)

Nancy wants to “ignore this problem and refuse to negotiate.” – Steve Scalise

Nancy’s strategic action of ignoring the will of the people is indeed an action; however, not a very good one.

The Country is on to the Democrats now. It is no longer business as usual for them in the House. They will most likely find that out the hard way when they lose miserable – again – in the 2020 election.

Think about this: Nancy Pelosi passed a bill yesterday that will allow taxpayer money to be given to foreign entities that fund abortions, but she won’t give more taxpayer money to the Department of Homeland Security to effectively secure America’s border. #priorities pic.twitter.com/KWft5oukhW