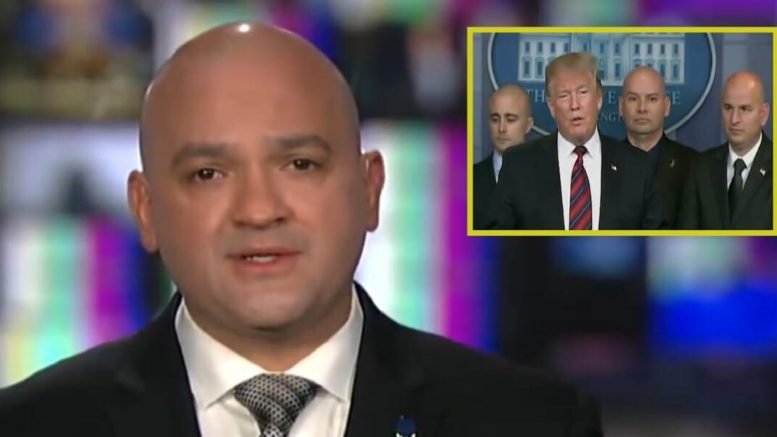 Hector Garza, Vice President of the National Border Patrol Council joined “Fox and Friends” Saturday morning where he weighed in on the crisis at the U.S. southern border.

Amid the partial government shutdown, President Trump is keeping up his fight for the American people to protect the safety of the country. (Video Below)

Hector Garza joined President Trump Thursday at the White House during a press briefing where he stood with the President in securing the border.

During his interview, Garza explained that border security is national security. “What happens at the border, and what comes across the border, doesn’t stay at the border. It actually continues into the United States and and effects a lot of Americans.”

He said that what is happening at the southern border right now, is in fact, a national security issue as the border patrol has seen an increase of illegal immigrants crossing the border along with narcotics. (Video Below)

“If congress will not fund border security and that border wall, then the President should use his authority to make sure that he protects Americans. It has to be done.” Hector Garza urgerd.

The panel showed the 2018 border stats blown up on the big screen so that people get the facts and not the spin.

According to the Department of Homeland Security, 1.7 million pounds of narcotics have been seized, 17,000 adults have been arrested with criminal records, 6,000 gang members, including MS-13 have been apprehended, along with a spike of attacks on border agents in San Diego up 300%.  (Video Below)

The Vice President of the National Border Patrol Council pointed out that when Nancy Pelosi said she was going to only appropriate one dollar for the border wall, he pushed back calling it “irresponsible” of her.

“It’s very clear some politicians out there are not serious about border security, and they are putting their political futures ahead of border security in the American public.” Garza said bluntly.

He added, “As border control agents, we need this wall and proper funding for border security so we can keep Americans safe and keep border agents safe.”

He pointed out that border control agents working at the San Diego border were being “rocked” by illegal immigrants from Tijuana and what kept them safe was the actual border fence that is in place in California.

Garza slammed the biased mainstream media who refuse to report the facts about the border or the agents. He said they have Trump derangement syndrome, and he explained they should report the truth that President Trump reaches out to the border control agents and listens to find out what they need.

When asked who are the experts who tell the left a wall is not necessary, Hector responded, “Clearly these people have never walked or worked in the shoes of a border control agent. We have all these talking heads coming out on all these shows and MSNBC and CNN, and they are talking about how walls don’t work, but come on. They’ve never been to the border. Some of these people have no idea how the border works.”

(Related Article: Pres Trump Calls Democrats Out Of Hiding In His Latest Shutdown Suckerpunch: ‘Where Are The Dems?’)