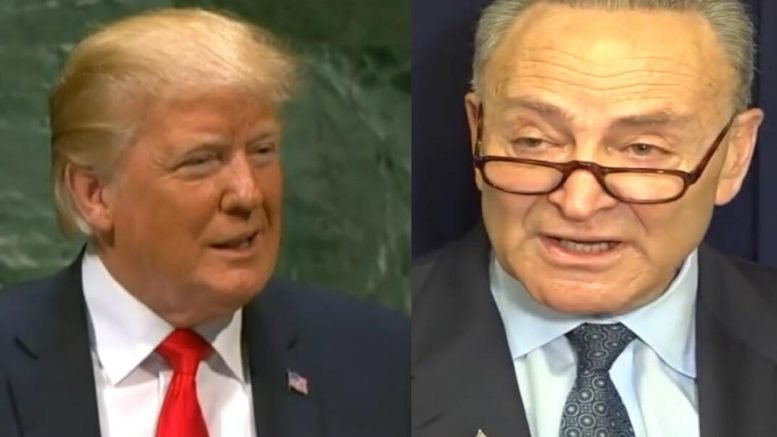 Senate Minority Leader Chuck Schumer (D-NY) didn’t find it funny when President Trump, the ultimate troll master, posted a Game of Thrones meme and a picture of the wall.

Schumer, extremely triggered with Trump derangement syndrome, responded to the President’s brilliant meme, then the New York Senator was fed to the wolves on Twitter.

The President shared a Game of Thrones-style image on Twitter Saturday amid the partial government shutdown and the news conference held at in the Rose Garden at the White House.

The image featured a picture of the president with the phrase “The Wall is Coming,” in homage to the Game of Thrones TV show’s slogan “Winter is Coming,” reported Breitbart. (Continued Below)

The bottom of the image depicted the president’s ideal “steel slats” barrier for the proposed wall along the U.S. southern border.

“They don’t like concrete, so we’ll give them steel,” Trump told reporters after returning to the White House from a meeting with his advisers at Camp David. He added, “We’ve been in touch with a lot of people, and I informed my folks to say that we’ll build a steel barrier — steel — that it will be made out of steel, that it will be less obtrusive and it’ll be stronger. And we’re able to use our great companies to make it, by using steel.” (Continued Below)

Here are a few responses from Twitterverse; Chuckles got fed to the wolves.

The ball is in YOUR court @SenSchumer
The people of this country want this wall built. Say his name #OfficerSingh

Cpl. Ronil Singh was an innocent person. His wife and 5 month old baby boy are now without him forever. That alone is worth the partial shutdown until Dems agree to #buildthewall.

THE WALL IS COMING. PLEASE STEP OUT IF THE WAY.

Fund the wall, you are the one hurting America!

The visible panic in you and Nancy is becoming quite interesting to watch.

But I thought this is what you wanted just 5 years ago? Wonder what changed your mind?

We all love the wall…and the memes….

That’s your job Senator. Vote on the bill the House has already passed that the majority of the Senate and the President will sign. It’s pretty much exactly like the one you unanimously voted for 5 years ago.

I like the memes. And the government can stay closed indefinitely. #BuildTheWall

Chuck everyone I know loves this and the fact that he is fight for us! #MAGA!!!! America’s President Donald J Trump! Texans want the Wall finished! Stand firm President Trump!

This is our country and we’re taking it back, you can get on board or get out!

Quit grandstanding and trying to score non-existent political points and fund the wall. While you're at it, add 500 more officers to ICE.

Did you just assume this was a meme? How dare you sir.

You are living meme. And Gif. LOL pic.twitter.com/GGI2WrcwUF