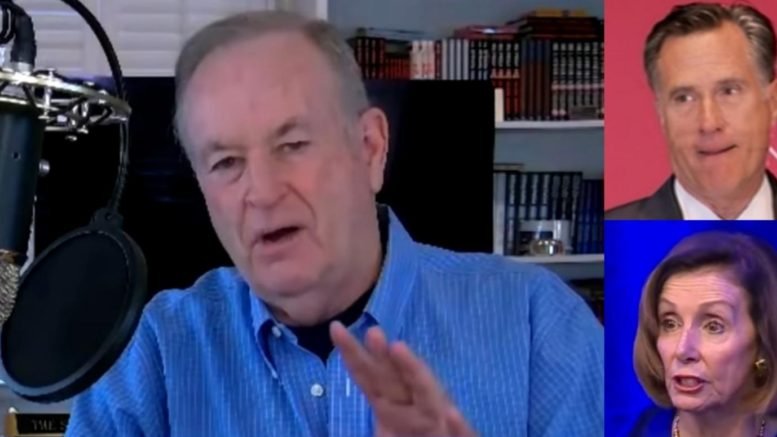 Mitt Romney confused many Republicans when he bashed President Trump in his Washington Post op-ed, and Bill O’Reilly finally is making some sense out of it.

In a recent interview, O’Reilly broke down  Democratic strategy moving forward and how it correlates to the position Mitt Romney is putting himself into.

Is Romney signaling he is here to replace McCain and Flake as the opposition votes to the President’s agenda in the Senate?

O’Reilly started off by telling his viewers to get used to the tactics used by Democrats and that their only goal is to “get rid of Donald Trump, and to replace him with a Democrat in 2020.”

Of course, O’Reilly thinks Democrats would like to see left-leaning legislation passed, but he also thinks they’re aware that without a Democrat majority Senate and President, there is little chance anything will pass in their favor. So he says, “All of their energy will be in removing Donald Trump one way or another.”

O’Reilly then took this notion and applied it to the latest actions made out of Mitt Romney.

One is to fill the voids of Jeff Flake and John McCain, who often put pressure on the President. But O’Reilly doesn’t think Romney will be as extreme and will side with Republicans as long as McConnell instructs him to do so. But the other reason lies with what we are seeing out of Democrats, who are about to give their all in trying to impeach President Trump.

O’Reilly thinks Romney is only positioning himself in case, for whatever reason, President Trump gets implicated in something serious enough that he doesn’t have the strength to run again in 2020. And although the odds of this are low, no Republican can look into the future and know what kind of mud Democrats will sling at Trump, and if it will stick.  Video Below