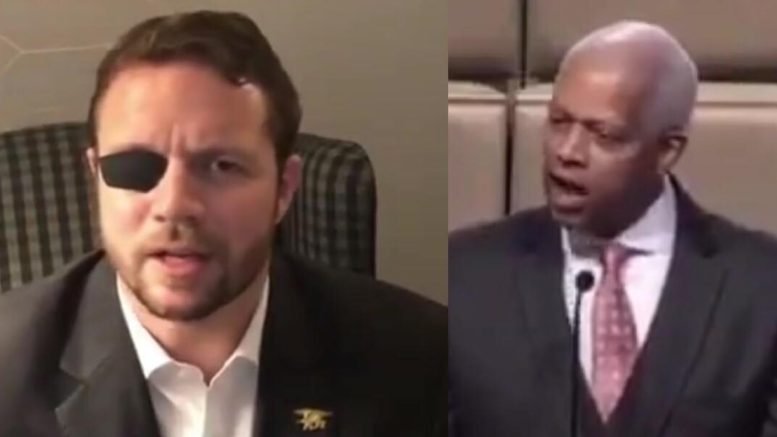 Rep. Dan Crenshaw, (R-TX) ripped Rep. Hank Johnson, (D-GA) on Sunday for degrading the millions of Americans who voted for and support the Commander in Chief, Donald J. Trump.

Johnson, who gave a keynote address to the Atlanta NAACP, compared President Trump to Hitler, and then he claimed Trump supporters as being “older, less educated, less prosperous” and “dying early.” Further, he said that many are dying from “alcoholism, drug overdoses, liver disease or simply a broken heart caused by economic despair.” (Video Below)

Rep. Dan Crenshaw shot back at Rep. Hank Johnson’s ignorant Hitler remarks as intellectually dishonest and as a huge insult to the millions of Jews who suffered and died during the Holocaust in Germany.

Responding to Johnson in a video, Crenshaw posted a video on Twitter and said, “Ok Mr. Johnson, President Trump is a lot of things but he’s not Hitler. He didn’t kill millions of people. He didn’t start a world war. He doesn’t have any concentration camps.”

He promised that despite disagreeing with Johnson’s political ideology, he would never insult the Americans who voted for him or members of his party. “I will never paint half the country as deplorables or fools or the dregs of society. I’ll never do it, and if I do, you better call me out on it, because I can’t imagine a worse form of leadership.” (Video Below)

“So I’ll leave you with this: Pick on somebody your own size,” he continued. “Pick on me if you’d like. My office will be right down the hall from yours. I’ll see you in Washington.”

The Texas congressman tweeted along with his video, “Stop insulting Americans just because they vote for someone you don’t like.” (Video Below)

Stop insulting Americans just because they vote for someone you don’t like. pic.twitter.com/8wrP3ybtPe