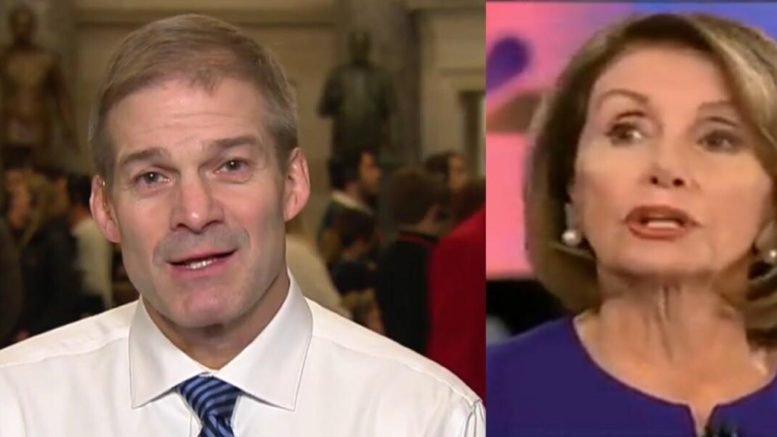 Rep. Jim Jordan (R-OH) took to Twitter daring Speaker Nancy Pelosi (D-CA) to put her mouth where her money is.

Amid the partial government shutdown, and Democrats refusing to budge for funding for a wall, Jordan exposed Pelosi’s hypocrisy. (Video Below)

She has repeatedly referred to the implementation of a wall along the U.S.-Mexico border as “immoral” or “an immorality.”

During a town hall event on MSNBC, she added that the idea of a wall would instill fear among U.S. citizens.

Rep. Jim Jordan took note of Pelosi’s remark and shot back, challenging her with an ultimatum. (Video Below)

Jordan wrote on Twitter Monday morning, “If @SpeakerPelosi thinks the border security wall is immoral, then why doesn’t she sponsor legislation to take down the existing wall between San Diego and Tijuana?”

He also pointed out in an interview Monday on Fox News with Neil Cavuto, “Democrats are more focused on stopping the President than helping the country, and until that changes, I think it’s difficult to get to a solution. The solution is real simple. Democrats should support what they’ve supported before, which is funding for a border security wall.”

“This is just common sense,” Jordan added. (Video Below)

If @SpeakerPelosi thinks the border security wall is immoral, then why doesn’t she sponsor legislation to take down the existing wall between San Diego and Tijuana?

"Democrats are focused on stopping the President, the solution is simple to support funding for the Wall." @TeamCavuto#DoWhatWeSaidhttps://t.co/vcGQq6YNKM