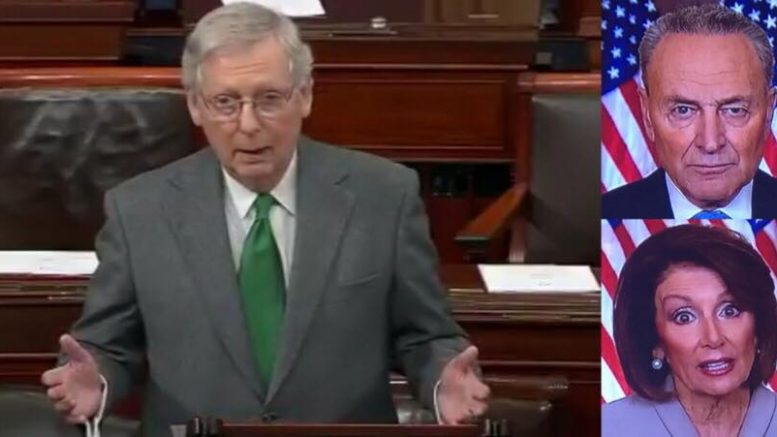 Speaking on the Senate floor, Senate Majority Leader Mitch McConnell (R-KY) had a thing or two to say about Democrats and their hypocrisy.

The Kentucky Senator exposed Democrats for previously voting for a border wall, but refuse to now because of politics. (Video Below)

Last week Speaker Nancy Pelosi claimed “walls are immoral.” During a town hall event on MSNBC, she added that the idea of a wall would instill fear among U.S. citizens.

Senate Majority Leader Mitch McConnell shot back on the Senate floor regarding the need to secure our border and fund the government.

While addressing his colleagues, he explained that walls and barriers are “not immoral.” (Video Below)

“Walls and barriers are not immoral. How silly. Enforcing our laws wasn’t immoral back in 2006 when then-Sen. Clinton, then-Sen. Obama, and our friend the Democratic Leader were proud – proud – to vote for physical barriers.” Sen. McConnell said.

The Senate Majority Leader continued, “The only things that has changed between then and now are the political winds of course, the occupant of the White House. So, this is no newfound principled objection, it’s just political spite.”

He added that it’s a partisan tantrum being prioritized over the public interest. (Video Below)

Five years ago, the entire Senate Democratic caucus voted for hundreds of miles of fencing along the U.S.-Mexico border. In 2013 and in 2006, prominent Democrats voted in favor of a physical barrier along the southern border.

All 52 Democrats, plus Sens. Bernie Sanders, I-Vt., and Angus King, I-Maine, voted in favor of the 2013 bill, which died in the House. And in 2006, Democrats like then-Sens. Barack Obama, D-Ill., Hillary Clinton, D-N.Y., Joe Biden, D-Del., and current Senate Minority Leader Chuck Schumer, D-N.Y., voted in favor of the Secure Fence Act, which would add “two layers of reinforced fencing, installation of additional physical barriers” to ports of entry along the southern border, according to Fox News.