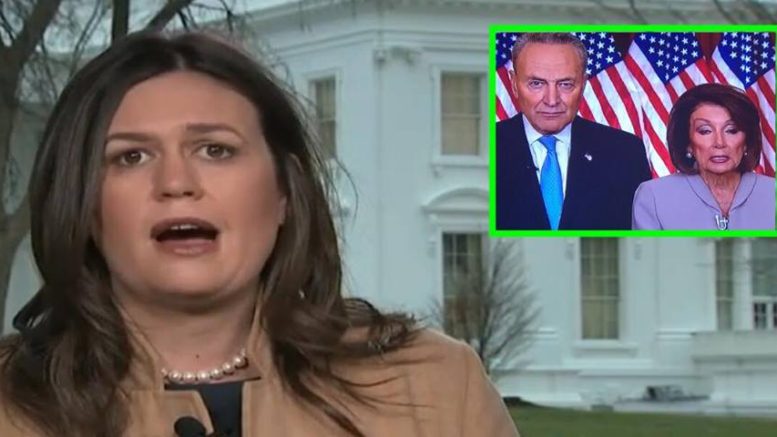 The Commander in Chief gave an extraordinary speech addressing the nation from the Oval Office Tuesday night where he pressed the importance of border security.

Afterwards, Speaker Nancy Pelosi (D-CA) and Senate Minority Chuck Schumer (D-NY) accused the President of manufacturing the crisis at the border. (Video Below)

Press Secretary Sarah Huckabee Sanders pushed back at Pelosi and Schumer Wednesday morning in an interview on “Fox and Friends,” where she said that the Democratic Party would rather play politics than protect the American people.

She explained that Democrats are in denial about the situation at the southern border, and the President is trying to make deals on both sides of the parties to fix border security.

President Trump said during his address that there is a growing humanitarian crisis at the border and urged Democrats to approve $5.7 billion for the border wall.

“This is a humanitarian crisis, a crisis of the heart and a crisis of the soul. Last month, 20,000 migrant children were illegally brought into the United States, a dramatic increase. These children are used as human pawns by vicious coyotes and ruthless gangs. One in three women are sexually assaulted on the dangerous trek up through Mexico. Women and children are the biggest victims by far of our broken system,” Trump said Tuesday night. (Video Below)

During her interview, the Press Secretary responded to the Democrats’ rebuttal where she called it ridiculous and added it is typical because they resist everything the President proposes.

“They care more about playing politics than they do about protecting Americans. I think what we saw last night was frankly a pathetic excuse. If this is the face and the future of the Democrat party, I think things are looking really good for Republicans,” Sarah Sanders said.

She pointed out that President Trump is willing to work with Democrats by changing the design of the border wall to steel instead of concrete along with adding new technology to assist Border Patrol agents. (Video Below)

“Now they have to show that they’re willing to do their jobs and do something other than fight this president,” Sarah insisted.

(Related Article: Graham RIPS Dems On Their Reply To Trump: ‘Was It Manufactured When Obama Wanted The Money?’)

Pelosi and Schumer’s rebuttal focused on wanting to reopen the government and debate border security afterwards. President Trump isn’t falling for their trap.