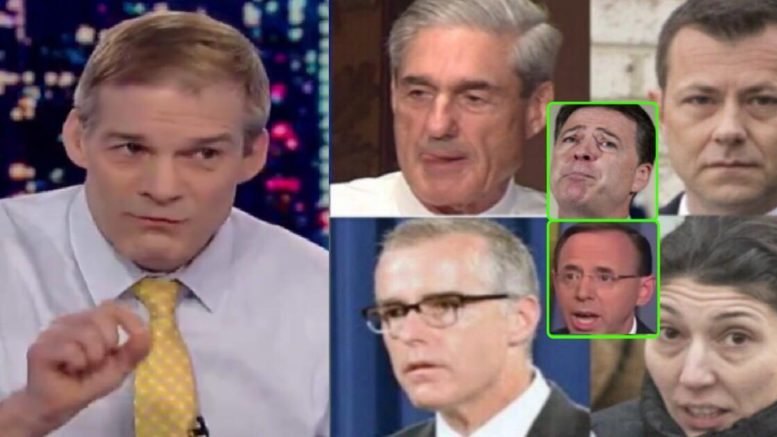 Rep. Jim Jordan explained that President Trump is doing a great job and listed off a number of achievements the President has accomplished.

“I’ve said this time and time again. Think about what we have seen in the last two years. Regulations reduced, taxes cut, economy growing at an unprecedented rate, lowest unemployment in 50 years, 312, 000 jobs added last month, Gorsuch, Kavanaugh, the Iran Deal, the embassy in Jerusalem, and the new NAFTA agreement.” Jordan named off the President’s successful promises kept and added, “you can go on and on.”

He explained that it’s been a great two years, but “democrats want to keep focus on trying to stop him instead of helping the country.”

“Vote for border security wall a few year ago, but they are against it now because it will help the President. Forget about what’s good for the country, their focus is solely on stopping the President.” Jordan said. (Video Below)

Jordan explained on the first day Democrats took over the House that Congressman Brad Sherman (D-CA) filed impeachment articles. He also pointed out Congresswoman Rashida Tlaib, (D-MI) who used profanity and called for impeachment toward the President right after she was sworn in.

He mocked the Democrats who are bringing in Michael Cohen for their first big hearing. “They’re bringing in a guy who was convicted felon, who is going to prison in two months, and you know one of the things he’s gonna convicted of? Lying to Congress. Go figure. You can’t make this stuff up.” (Video Below)

Jordan responded to The New York Times article that claimed Trump was secretly working on behalf of Russia.

(Related Article: In A Fierce Statement, Trump Reacts To FBI’s Investigation Over Comey’s Firing: ‘He Was A Crooked Cop’)

He said, “Two things: you got to remember who’s saying this, who’s doing this and what are they doing. So, who’s doing it? Andy McCabe, former deputy director of the FBI who was fired and lied 3 times under oath. Lisa Page who was demoted and left the FBI. Peter Strzok, former deputy of counterintelligence, demoted and then fired by the FBI. Jim Baker, general counsel at the FBI, demoted and then left. These 4 people are the ones who have this extreme animus toward the President.”

“They are the ones that are saying to start this counterintelligence investigation into the President. It’s ridiculous, and remember when it happened. It happened just days after their best pal, Jim Comey is fired.” Jordan explained.

He pointed out the 8 critical days in May to break it down.

“Even with all this Judge, Jim Comey testified, and up until the day he was fired said there was no evidence to show any type of coordination between the Trump campaign and Russia influencing the election. Lisa Page said the same thing when we deposed her.” Jordan explained.

Jordan also noted Peter Strzoks text message with Lisa Page when they said “there is no there-there.” That is the day after Robert Mueller was named special counsel.

The Judge asked Jordan why is Rosenstein allowed to leave amid everything that has been discovered. Jordan responded telling the Judge that he and Rep. Mark Meadows sent a letter to the DOJ demanding that Rosenstein needs to still testify so truth can be revealed to the American people. (Read letter in related article below)

(Related Article: Right As Rosenstein Tries To Sneak Away, Jordan Makes A Move To Pull Him Back To Congress)

Congressman @Jim_Jordan joined me on set with reaction to my exclusive interview with @realDonaldTrump, take a look : pic.twitter.com/MHhkBAV3Wi